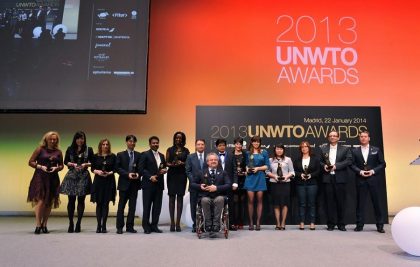 The Senate on Friday said the election of Nigeria as Vice President of United Nations World Tourism Organisation (UNWTO) was a wake-up call to all arms, organs and levels of government to develop the tourism and creative sector.

Sen. Mathew Urhoghide, the Senate delegate to the on-going 22nd General Assembly of UNWTO in Chengdu, China,  stated this in an interview with the News Agency of Nigeria (NAN).

NAN recalls that the Minister of Information and Culture, Alhaji Lai Mohammed, was  on Wednesday  elected on behalf of Nigeria as the Vice President, Africa,  of  UNWTO, a UN body charged with the statutory responsibility of developing and sustaining tourism globally.

Urhoghide said: `The election of the minister is a welcome development because when you have an international body recognising you as a country and giving you such an exalted position, it only means that you are in proper reckoning in the world.

“UNWTO is an organ of the UN in charge of developing and sustaining tourism across the globe and it is one of the organs that the UN has respect for with countries in excess of 137 as members.

“Nigeria,  being nominated and accepted as Vice President,  has placed the burden on us, we too must come on board to be a force to be reckoned with when it comes to the matter of tourism development and sustenance’’.

The senator said that although the country had started placing emphasis on tourism development, more needed to be done by the Federal Government, states  and  local governments as well as the executive and legislature.

“The present minister is showing deep interest and by the virtue of this election as Vice President of UNWTO, it means that he has no option than for Nigeria to live up to the expectation of the international community,’’ he said.

On the take-away from the General Assembly, the senator said he was more convinced that “tourism is one huge area that can earn a lot of revenue for the country.’’

“There are countries we have seen here that are completely dependent on tourism like the Caribbean Island and even China which has placed a lot of premium on it.

“This Sichuan Province of Southwest China where we are today, although has a population of 91 million people, what it got from tourism is in excess of 70 billion dollars.

“According to the 2016 statistics that was presented, tourism contributed well over 10.6 per cent of the world GDP in excess of over 760 trillion dollars.

“The sector generated employment in excess of 640 billion jobs across the world while tourism export’s global contribution was 40 per cent,’’ he added.

He said that within West Africa, tourism contributed 14 per cent to the economy of the Gambia, whereas Nigeria was still grappling with about  1.3 per cent.

“What this means is that we have to go back and address the issue of tourism by utilising our rich and huge potentials,’’ he said.

He said from the sessions of the Assembly, it was obvious that the perceived problems militating against the development of tourism in the country were not peculiar.

“Talking of infrastructure deficit, security, even the developed countries have come out to say that they have the same problems yet they are advancing tourism,’’ he said.

The lawmaker said the conference had also underscored the need for the country to urgently review its visa policy to ensure tourists do not go through hardship to obtain visa.

He  pledged the cooperation and support of the Senate in the hosting of the 61st meeting of the UUNWTO  Commission for Africa in Abuja from June 4 to June 6 next year.(NAN)