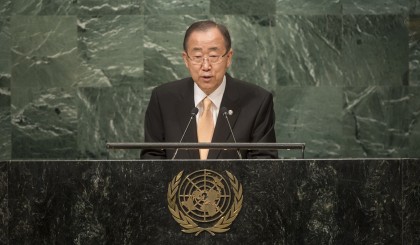 Former UN Secretary-General Ban Ki-moon on Tuesday urged the relevant parties to prevent any accidental conflict on the Korean Peninsula as situations get more dangerous than ever.

Ban made the call at a forum in central Seoul hosted by the Federation of Korean Industries, a business lobby group.

“Since the Korean War broke out, there have been many twists and turns and crises on the peninsula, but now is a more dangerous time than ever,’’ he said.

Report says the peninsula is still technically at a state of war as the 1950 to 1953 war ended in armistice, not peace treaty.

Ban, who came back to his home country earlier this year after ending his 10-year tenure as the UN chief, said the Korean Peninsula nuclear issue never reached the highest level of danger before like currently.

On Sept. 3, Pyongyang detonated its sixth nuclear device, which was seen as the most powerful ever conducted by the Democratic People’s Republic of Korea (DPRK).

The country claimed it was a hydrogen bomb that could be fitted atop an intercontinental ballistic missile.

The war of rhetoric was resumed between Pyongyang and Washington as U.S. President Donald Trump threatened to “totally destroy” the DPRK, which in turn warned the U.S. of the highest-level countermeasure in history.

“An accidental conflict should be prevented without fail as it gives no help to anybody like (South) Korea, the United States and Japan,’’ Ban said.

The U.S. forces dispatched B-1B strategic bombers from the Pacific island of Guam and F-15C fighter escorts from Okinawa, Japan to the Korean Peninsula over the weekend in an apparent show of force to the DPRK.

The bombers and fighters flew in international airspace over waters off the east coast of the DPRK, causing strong backlash from Pyongyang.  (Xinhua/NAN)