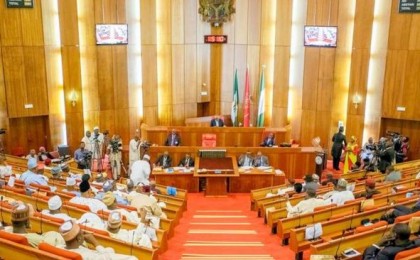 The Senate has said that it would prioritise the passage of the Petroleum Industry Bill (PIB) upon resumption from its recess on Tuesday.

The Chairman of the Senate Committee on Media and Public Affairs, Sen. Sabi Abdullahi, made this known in a statement on Monday

He said other bills to be prioritised for passage included the Jungle Justice Bill and the Occupational Safety Bill and the Existing Vacancies Bill.

“Over the last few weeks, legislators from the 8th Senate have been traveling around their constituencies and meeting with the stakeholders and citizens that they represent.

” When we resume on Tuesday, Nigerians can be rest assured that the views and voices of all Nigerians will be considered in all the Senate’s activities.

“We have several noteworthy bills that are at various stages of consideration like the Existing Vacancies in the Federal Civil Service (Prohibition) Bill, which will help to ensure that all federal government civil service employments are properly advertised.

”We also have the Occupational Safety and Health Bill, which will ensure that employees receive adequate legal protections in their places of work.

“Of course, we cannot forget the three Petroleum Industry Governance Bills that have been sent to the relevant committees for work.

”These three Bills are aimed at providing legal frameworks and other critical aspects of the petroleum industry not captured in the recently passed Petroleum Industry Governance Bill (PIGB).

“We will also consider resolutions on the next actions to take with the flooding that has occurred in several states across the nation.

Through our oversight powers, we will continue to work with the executives at various levels to ensure that our town planning laws are updated to mitigate against flooding and other man-made disasters.

”We have our work cut-out for us, however, working with and on behalf of all Nigerians, we will achieve all that we have set out to do,” he said.

Abdullahi further stated that the upper chamber would welcome presentations from senators on the outcome of meetings and consultations held with their constituents during the recess.(NAN)