South African Unions To March Against Corruption Under Zuma 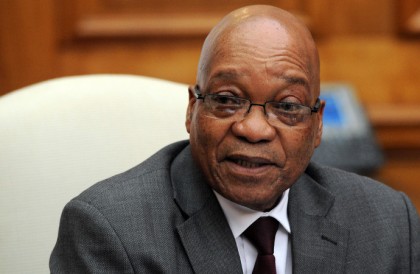 Thousands of South Africans will march on Wednesday against corruption under President Jacob Zuma’s rule in protests led by unions which backed a rival to the president’s faction as the next leader of ANC.

The Congress of South African Trade Unions (COSATU), which is in alliance with ruling African National Congress (ANC), had called on its more than one million members to join marches in major cities across South Africa.

Though the protests were officially against graft broadly, much of the frustration and anger were aimed at Zuma.

COSATU said in a statement that “corruption has become endemic under this administration.

“This calls for all of us as workers and citizens to stand up and push back against this rot.”

Senior ANC members had urged Zuma to step down in recent months following a swell of allegations that his friends, the Gupta family, wielded undue influence over award of state contracts worth hundreds of millions of dollars.

The raiding of taxpayers funds by outside interests was known locally as “state capture’’.

However, the Guptas and Zuma denied any wrongdoing, saying they were victims of politically-motivated witch-hunt.

The ANC will pick its next president in December with Deputy President Cyril Ramaphosa’s camp prioritising the fight against corruption, boosting economic growth and winning back the trust of supporters, whom he said have become disillusioned with the party under Zuma.

On the other hand, Zuma’s powerful faction was expected to back his ex-wife and former AU Chairwoman, Nkosazana Dlamini-Zuma, although other candidates could still emerge as serious contenders.

“Wednesday’s series of marches and protests that target corruption and State Capture are also targeting Zuma and his succession faction in the ANC,” said Gary Staden, political analyst at NKC Research.

He said “if the labour movement can produce a show of force reminiscent of its halcyon days, it would prove a major boost to the aspirations of Ramaphosa.”

Zuma could remain head of state until parliamentary election in 2019, although the next ANC leader could edge him out next year.

Some analysts said an opposition coalition could unseat the ANC at that vote, an unthinkable scenario a few years ago for a party that led comfortably since it swept power under Nelson Mandela at the end of apartheid in 1994. (Reuters/NAN)