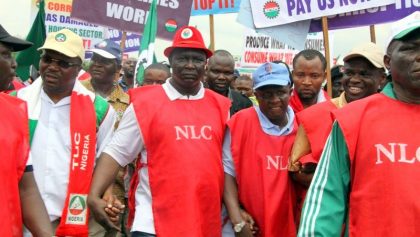 Nigeria Labour Congress (NLC) on Friday picketed the offices of Abuja Environmental Protection Board (AEPB) and telecommunications giant MTN for allegedly engaging in casualisation of workers and denying them their privileges.

The NLC President, Mr  Ayuba Wabba, said the picketing of the two organisations became necessary in the face of their utter disregard for trade union rights and as commemoration of World Day for Decent Work (WDDW).

The WDDW is slated for Saturday, Oct. 7.

Wabba said that the NLC had it on good authority that Abuja street sweepers were being knocked down by hit and run vehicles without compensation to their families by AEPB.

He said NLC would not fold its arms while AEPB treated workers as slaves, adding that Abuja street sweepers deserved better treatment by giving them  good conditions of service.

Mrs Ogbonna Kate, Deputy Director, Environmental Health and Safety, AEPB said that the agency was already taking steps to regularise the appointment of some of the workers.

She said that the management of AEPB would meet and get back to NLC in one month.

Meanwhile, NLC has accused MTN of being in the habit of sacking workers every three months without respect for workers’ dignity and right.

He said, ‘’we must promote decent work.’’

He added that once a worker attained retirement age,   MTN sacked such person without compensation.

He accused MTN of arrogance and displaying impunity, pointing out that graduates in MTN were treated as casual workers with no employment letters.

In her reaction, Amina Usman, General Manager, MTN, Abuja, said she was conscious of the fact that ‘’we all need better working condition.’’

She said that MTN was working toward improving  workers’ welfare and promised that all the issues raised by the labour union would be addressed.

Usman promised to get back to NLC in one week, adding that the management of MTN would schedule a meeting at its corporate headquarters in Lagos to resolve the issues raised.

A mild drama occurred when MTN locked its gate against NLC members but the union compelled the management to open gate.

It took the intervention of the police to quell the violence that erupted when the union later gained entry into the MTN Maitama office. (NAN)