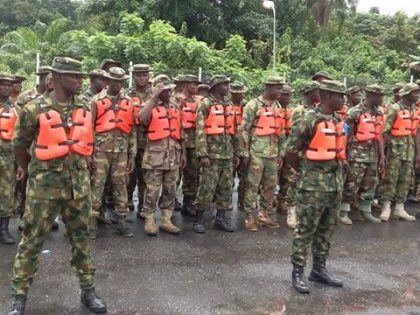 The 4 Brigade Headquarters of the Nigerian Army, Benin, has arrested 30 suspects for various criminal offences and destroyed more illegal refineries in continuation of its Operation Crocodile Smile II.

The Brigade Spokesman, Capt. Mohammed Maidawa, said on Friday in Benin that 24 out of the 30 suspects were apprehended for being in possession of hard drugs.

Maidawa said three were arrested for alleged kidnapping, while others were held for illegal oil bunkering and militia activities.

According to him, the 24 suspects were arrested at a bar on Airport Road, Benin, and three at Ugbolukangin Community in Ovia South West Local Government Area in Edo.

He said that others were arrested at Boboluku Community in Ethiope Local Government Area of Delta, adding that all the suspects were being questioned by the relevant security agencies.

Maidawa said the Brigade adopted the use of swamp buggies to ensure complete destruction of illegal bunkering camps within its area of operations.

He said the innovation yielded positive results because several metallic tanks, drums as well as the covering of several dug-out-pits used for illegal bunkering were destroyed during the operations.

He also said that at Ebele Creek, two speed boats concealed in the swamp by militants were seized and that the boats were currently in the custody of the Brigade pending investigation.

He added that on Oct. 2 the Brigade discovered and destroyed five dug-out-pits and five metallic storage tanks loaded with about 110,000 litres of products suspected to be petrol and about 20,000 litres of kerosene.

According to him, the illegal refinery is located at Lapase in Ethiope West Local Government Area of Delta State.

He said the troops also intercepted and destroyed a Cotonou boat loaded with 100 jerry cans containing kerosene, 60,000 litres of crude and 35,000 litres of Automated Gas Oil (AGO) in Aziza area of Delta. (NAN)