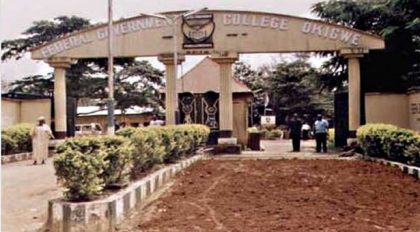 They made the call in a survey conducted by the News Agency of Nigeria (NAN) in Abuja, on the poor state of infrastructure in the unity schools in the FCT.

The stakeholders also listed lack of facilities such as infrastructure, perimeter fencing, water supply, electricity, toilets, healthcare and discipline among others as major problems.

The official noted that facilities in schools were over stretched and inadequate.

She said that most of the schools though have several boreholes but yet water was still not enough for the students.

“Most buildings are not all tailored toward what is needed, so sometimes it does not carry all the students, such as the hostels and classrooms that can hardly contain the population of students.

“Due to lack of infrastructure and overcrowding, if the school sticks to admitting the exact number of the students required the facilities will cater for them and things will be better.

“I think there has been misplacement of priority, government should put more money into education than politics, any government that wants the future to be better must invest in education,’’ she said.

Obabori, however, urged the Ministry of Education to ensure frequent inspection by the senior officers from the Quality Assurance Department to checkmate activities and structures in the school.

According to Yusuf, more funding should be given to government schools, so that they would be able to live up to expectations.

“Boarding schools have a lot of challenges and to some extent parents should be blamed, most children are not well brought up that is both in attitude and character.

“The parents leave largely everything to the schools to take care of their inadequacies, so I want to call on parents to ensure that their children are well brought up.

“There is also this destructive attitude of some students as it concerns government property, they do not take it seriously,” he said.

He also called for frequent unscheduled visit by the Quality Assurance inspectors to schools for proper monitoring.

“When they have more unscheduled visits they will be able to get a clear picture of the happenings in the schools.

“Rather than when a formal notice is given, many schools will just window dress and the inspectors will not be able to get clear picture of the happenings in the schools,’’ he said.

He also noted that the school has a population of 1,750 students.

Mr Anthony Ibeneme, Vice Chairman, Parents Teachers Association (PTA) FSTC, Orozo, said that the condition of the school was not encouraging and deteriorating.

According to him, the facilities are decaying and there are need for urgent attention and rehabilitation by the government.

He attributed the challenge of the boarding school to mismanagement and misplacement of priorities by the relevant government agencies.

“As PTA, we have engaged the school authority and we understood that they are handicapped in the things they can do because of lack of fund.

“The role of the PTA, according to the Ministry of Education, is to play a complementary role to support the institutions in discharge of their responsibilities; therefore, the PTA is limited in what it can do,’’ he said.

He, however, called on the Federal Government to set up an ad hoc committee that would go round and check what is lacking in schools and help put them right.

Ibeneme told NAN that issues of perimeter fencing, classrooms, hostels among others are huge projects that the school alone cannot handle.

Abah said that the school always uses generator as a source of power supply as there was no electricity supply from the Abuja Electricity Distribution Company (AEDC).

The security called on the Federal Government to do the needful and provide adequate power supply for the school to ensure safety of the students’ lives and property.

A parent, Mrs Rita Ibe, also expressed concern over lack of infrastructure and other facilities in government’s boarding schools.

According to Ibe, you will be shocked to find out that in most of these schools due to lack of power supply and water most of the students do their thing in the bush.

“This is not right at all; why must the students suffer for some of these inadequacies. I think this is right time for the government to rehabilitate the schools, ‘’he said.

At Federal Government Boys College, Abuja,  Mr Johnson Udeani, a parent, who spoke with NAN, said that one major issue in the school was over population of students.

He attributed it to the fact that they were still occupying their temporary site where the school is presently located.

” The school is still occupying their temporary site; they have not moved to their permanent site, which is in Wuye.

“So, when you go to the dormitories they are over populated; I do not know why they have not moved to the permanent site or at least move either the juniors or the seniors.

Speaking on adequate teachers, he said the school had enough teachers being in the city centre.

He said the PTA in the school was trying their best, adding that classrooms had been renovated by the association.

He also said the school fees had been increased from N19,000 to  about N30,000 boarding fees inclusive, stating that the rumours that unity schools had not increased school fees was very true.

Another parent, Mr Emmanuel Okafor, who spoke on the issue of students sneaking out of school to engage in one vice or the other, said his son had told him some boys in the school engaged in such act.

He, however, said he could not confirm if it was true but he believed what his son had told him.

He said parents had a very important role to play in ensuring they bring their children up properly.

He said many parents did not discipline their children so when they got to school ‎they misbehaved and when they punish them they think their teachers are being wicked.

NAN correspondents who visited the school observed that the school is enjoying stable power and water supply being located in the city centre.

NAN also reports that the school is properly fenced with adequate security.

While reacting to the poor state of unity schools in the country, Mrs Chinenye Ihuoma, Director of Press, Federal Ministry of Education, said the schools were not as bad as the public are painting it.

She said the government had been doing a lot in refurbishing the schools across the country in phases.

” There is what we call maintenance culture and the government is doing its bid to maintain these schools, in spite of the paucity of fund.

” We have 104 unity schools across Nigeria in the different States and the infrastructural facilities differ from state to state.

” Some may need water, while other could be hostel accommodation, classrooms, toilets and electricity among others.

Ihuoma added that many of the schools are better than the private schools in the areas of teaching and infrastructural facilities.(NAN)