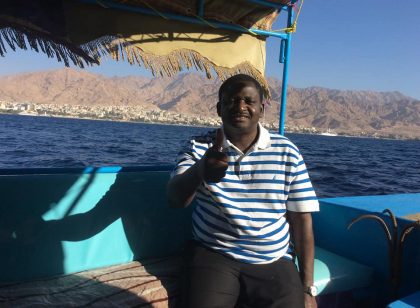 It was a gust of chilly wind that said Akwaaba (welcome, in Ghanaian language) to me in the Jordanian city of Aqaba, that night of December 1, 2017. We had flown for about five hours from Abuja, as President Muhammadu Buhari was to attend a summit on combating terrorism in West Africa, convened by King Abdullah II of Jordan.

The presidential plane touched down at King Hussein International Airport at 8.15 p.m local time (7.15 p.m Nigerian time) and a cold embrace was what Aqaba offered. It was winter, and the city gripped you in a forceful bear hug that was icy cold. Nobody taught me before I made a dash for the vehicle that was to take me into the city.

I had checked the weather condition online before we left Nigeria. I was told 11 degrees cold. I was ready, but nearly not ready enough. That cold hug was more like six degrees. Incidentally, that turned out to be the only very cold evening, till we left Jordan three days later.

Three state governors-those of Osun, Kogi, Niger- had accompanied the President on the trip. I was in the same car with Governor Rauf Aregbesola of Osun State. Did the protocol people know that this was my own very governor, or it was mere coincidence? Well, we had a good conversation as we rode into the city. The governor talked about the historical significance of Aqaba, how some ceasefire had been negotiated in the city in the past, how it is the economic nerve centre of Jordan, how the country has no petroleum or many other mineral resources but was quite prosperous, and above all, how Jordan was an oasis of peace in a region characterized by almost perpetual turmoil. I was intrigued, and decided to write a travelogue after the trip. So, this piece you are reading, was inspired by my discussion with Gov Aregbesola of the State of Osun, during the 15 minutes ride from the airport to the Intercontinental Resort, Aqaba.

Presidential trips are normally busy, very, very busy, as you have to keep Nigerians back home and those in the Diaspora updated on the activities of their President. But this trip was peculiar, in that it was about security, and not everything needed be reported. There was, therefore, some time for leisure. I used it. Wouldn’t you?
My room at the hotel overlooked the Red Sea. You only needed to draw your curtains (which I did on Saturday morning) and you were confronted by the majesty of the sea, with the waters shimmering in the early morning sun. The poet, John Keats, had written about feasting one’s eyes on the glory of the sea.

“O ye that have your eyeballs vext and tir’d, Feast them upon the wideness of the sea.

O ye whose Ears are dinned with uproar rude, Or fed too much with cloying melody Sit ye near some old Cavern’s mouth and brood, Until ye start as if the Sea Nymphs quired.”

And that was what I did. I feasted my eyes on the wideness of the sea. It was blue, expansive, as far as the eyes could see.

Blue? But this one was supposed to be red. Well, in 2011, I had visited Israel, and while heading for the Taba border to cross into Egypt, for an expedition to Mount Sinai, I had passed by the Red Sea. It was blue, and I had taken our tour guide to task. This was how I conveyed the explanation in a piece published in Daily Sun on December 2, 2011.

“But is that sea really red? Not actually. Why is it then called the Red Sea? The water is actually bluish, as in any other sea, but the surrounding mountains are brown in colour, something like the hue that is called ox blood. So, in the afternoon hours, when the sun is at its peak, the mountains cast a reflection on the waters. The incandescence turns the waters almost red….So, what better name for the sea? The Red Sea.”

Since there was some time on our hands, before the bilateral meeting between President Buhari and King Abdullah II, on Saturday, I called some of the media people on the trip: Abiodun Oladunjoye, a deputy director in the Media Department of State House, Ismaila Chafe of News Agency of Nigeria, Rashidat Yusuf of Mitv, and her camera man, Kelvin Okeke. “Let’s go tour the city!” They were game.

We trooped into a bus, accompanied by a guide named Mustapha Abughalion. For the next hour, we were footloose in Aqaba, seeing many points of interest.
First port of call was the bank of the Red Sea. Aqaba is a desert city. In fact, it is said that it experiences rainfall only about twice or thrice a year, but God has compensated with the Red Sea, which brings some moistness to the atmosphere. And the sea is the source of commerce for the country. Different holiday resorts dot the long coastline, and these are patronized by people from all over the world. In 2010 alone, it is on record that Jordan received over 8 million visitors. Aqaba was also named the Arab Tourism City for 2011.

There is also the Port of Aqaba, which is the only one in Jordan. It was rated as Best Container Terminal in Middle East by Lloyd’s List in 2006, and we saw brisk business going on there.
Jordan is located on the tip of the Red Sea, between Asia, Europe and Africa. Aqaba is in southernmost Jordan, with a population of about 200,000 people. Another major city and capital of the country, Amman, has about 4 million people. In a country of about 9 million, Jordanians are five million, while the rest is made of people from Palestine, Syria and Iraq, most of who who came as refugees. Jordan is quite hospitable.
Aqaba is neat, squeaky clean. Street sweepers are seen on duty, picking even the tiniest specks. The traffic is very sane, with disciplined drivers. No stress.

A city called Petra is a World Heritage Site. Other tourist attractions, about 100,000 nationwide, include the Dead Sea, near Amman, the River Jordan itself, where Jesus was baptized, in fact, Jordan has been custodian over some holy sites in Jerusalem since 1924.
The two main world religions,

Christianity and Islam, have venerated sites in Jordan. Al-Maghtais is believed to be the site where Jesus was baptized in the River Jordan, while Mount Nebo, Madaba and Machaerus, are also in the country. Moab, Ammon, and Edom, in biblical times, were located in today’s Jordan.

Archaeologists have found what is believed to be the site of the world’s oldest church in the country. It dates back to 3rd Century AD, slightly older than the Church of the Holy Sepulcher in Jerusalem, and the Church of the Nativity in Bethlehem. Both date back to 4th Century AD.

Though Jordan is about 98% Muslims, there is an indigenous Christian minority, about 5,000 of whom live in Aqaba. The city has several churches, and one Christian school, Rosary Sisters School.

Among holy Islamic sites in Jordan are shrine of Prophet Muhammed’s companions (Peace be upon him) like Abd Allah ibn Rawahah, Zayd ibn Harithah, and Muadh ibn Jabal.

Aqaba is about 20 minutes away from Saudi Arabia, and we drove till we were five kilometers away, before turning. One could see the longing in Rashidat Yusuf’s eyes. She would have given anything to be able to get into Saudi, and perhaps, do a quick Umrah. Some other time, Hajiya.

Surrounded by tumultuous countries, bordered directly by Saudi Arabia, Palestine, Iraq and Syria, how come Jordan is so safe? Apart from the November 9, 2005 bombing of three hotels in Amman by Al-Qaeda, killing 60 people and injuring 115, there have been no incidents. Internal security is quite high, and Jordan has good relationship with the West. It also has a peace treaty with Israel. King Abdullah II is known as a man of peace.
Health care in Jordan is world class. In fact, medical tourism yielded over 1 billion dollars in 2010. Jordan is rated top in the region, and 5th world overall.

I had some options in my spare time on the third day. I could go scuba-diving, or take a cruise on the Red Sea. Scuba-diving? I shouldn’t be like the cricket that got so well fed, and burst its own tummy. Any form of diving was ruled out. You go diving so faraway from home, and mischief happens to you, the wailing wailers would have a field day, laughing till they fainted.

With Oladunjoye and Chafe, we paid for a cruise in a glass boat on the Red Sea. Why is it called glass boat? The bottom is made of glass, so you could look at the seabed. One could see all sorts of creatures in the sea, the flora and fauna. We saw different species of fishes, water snakes, sea turtle, sea weed, wreckage of boats, and so many other things. Under the sea is a treasure trove.

The boat was captained by a teenage boy named Yahaya. I could feel my heart moving into my mouth as we got into the middle of nowhere. Coward! Yes, I agree. I have sailed on the Atlantic Ocean, Indian Ocean, and many other seas. But I am still a coward where water is concerned. Chinua Achebe wrote that we often stand in the house of a coward, to point at the ruins of the house of a brave man. I agree. Yahaya obviously saw the fear in my eyes, and he gestured that I should not panic.

I chuckled as I remembered my wife. If she could see me, she would have exclaimed: “This man, is this what I sent you to Jordan to do?” But she didn’t know until I was back from the voyage. Men and their escapades!
Human beings can fear, instead of exercising faith. It is natural. In the middle of the deep, I began to scare myself. What if a mighty wave came, and submerged the boat? What if the engine suddenly stalled? What if fire broke out? What if the boat ran out of petrol? What if… Get thee behind me, Satan!
The only fright we had was when we met a military gunboat on patrol. It was at top speed. The waves it created made our boat bob up and down, and it was an uneasy experience. It subsided after some time.

To appreciate the glory of God, take time to go out on the sea. The heavens declare the glory of God, and the firmament His handiwork, says the Good Book. In another place, it says “they that go down to the sea in ships, that do business in great waters; these see the works of the Lord, and His wonder in the deep.” Every man needs that experience.

There were big seafaring vessels we met. Only God knows what part of the world they were coming from, with all sorts of names. Chakra. Costa Mediterranea. Shark’s Bay. And many others.
After about an hour, when we sighted our hotel right by the seashore, it was pure relief. The sail had been good, I’ll recommend it to anyone who has the heart for it. It sure has therapeutic value. But was I glad to step on solid ground again? All other ground is sinking sand. This was terra firma. Water was terra incognita. I’ll rather have my feet planted on solid ground at any time.

Newer PostPublic Alert on Campaign of Calumny Against The Leadership of The Nigerian Army
Older PostGeneral TY Danjuma: Tribute To A Patriot At 80 – Alkasim Abdulkadir