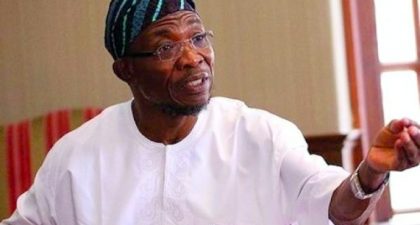 Gov. Rauf Aregbesola of  Osun said on Monday that his administration  spent N15 billion to empower 350,000 women and youths by training them in different vocations  in the last seven years.

Aregbesola made this known in Ede at the closing ceremony of the orientation course for Batch B Stream 1 2017 National Youth Service Corps (NYSC) members in the state.

The governor was represented by his deputy, Mrs Grace Titi-Laoye.

“It is worthy to note that this administration’s most important engagement is to get every able-bodied person in the state to work and we have provided every needed incentive for this.

“As at the last count, 350,000 people, especially women and youths,  have been empowered to the tune of N15 billion and we have not stopped,” he said.

Aregbesola expressed happiness that the corps members had been introduced to skills capable of making them self reliant in life during their training at the camp.

He, however,  said wealth creation could not  be left to the government alone, urging  the corps members to work toward  perfecting the skills they acquired  and utilising  them  for service to humanity.

In his speech, Mr Emmanuel Attah the State NYSC Coordinator,  urged the corps members “to imbibe the virtues that promote peace, unity and progress in their host communities.’’

Attah said the 21 days orientation exercise in the camp was meant to prepare them for the task ahead.

He advised them to steer clear of politics as the governorship election in the state was around the corner.

“Don’t get mixed up or engage in politics that can jeopardise your future. As corps members, you must stay apolitical and not allow yourselves be used by politicians,” Attah said.

He, however,  urged  those that had participated in skills acquisition and entrepreneurship programmes  in the camp to engage in further training after the orientation course to acquire expertise in their vocations.  (NAN)