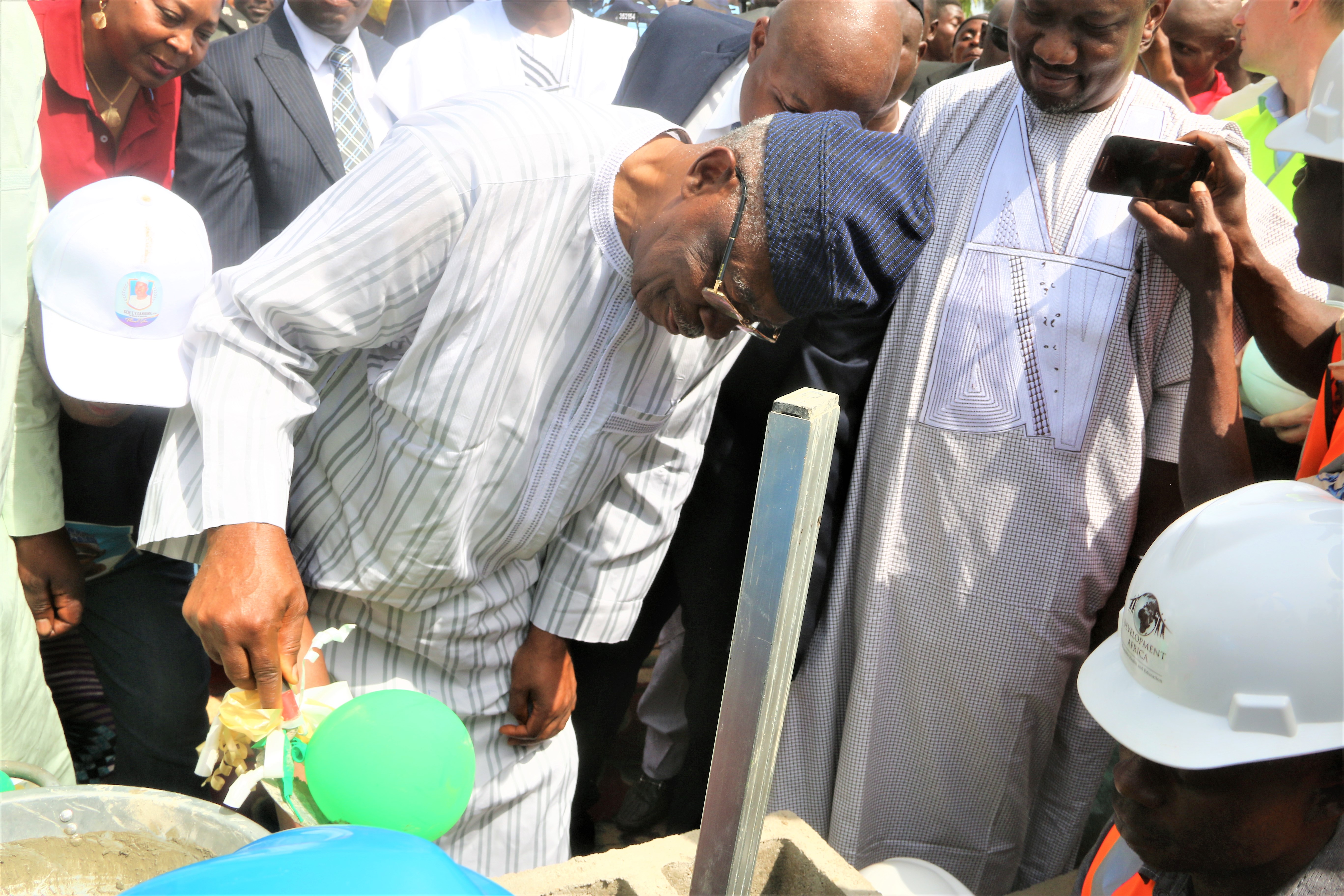 @NePcni and @vsfnigeria Activities in Takum, Taraba and Adamawa States in December

On Monday 18th of December 2017, Taraba State Governor Darius Ishaku laid the foundation stone for Government International Model Secondary School, Takum, to be built by the Victim Support Fund (VSF). According to Executive Director of the VSF, Prof. Sunday Ochoche, the siting of the school was a demonstration of the recognition that the state has been greatly impacted by the insurgency which has occasioned the massive influx of Internally Displaced Persons, IDPs, thereby leading to considerable strain on social infrastructure in the state.

He said that the fund was committing 1.25 Billion Naira to the project and is expected to be completed within eight months. Governor Ishaku, in his remarks, said the school, when completed, would not only compliment the current reform his administration has embarked upon in the education sector, but would help to accommodate students with deficiency in their O ’level examinations by providing remedial studies to fast track admission in to universities. On December 19, 2017, the T. Y. Danjuma Foundation donated an ultra-modern maternity health facility built by the Foundation to Takum community, in Taraba State, to check the prevalence of child and maternal mortality in the state. The founder and Chairman of the Foundation, Gen. T.Y. Danjuma (rtd), while commissioning the Rufkatu Danjuma Maternity in Takum said that he was alarmed by the World Health Organization (WHO)’s report that 140 women and 2,000 children, less than 5 years old, die daily in Nigeria. Danjuma, who described the facility as a ‘state-of-the-art, modern, sustainable and specialized mother and child facility’ said it was aimed at providing enhanced maternal and perinatal healthcare services to Takum and surrounding communities.

He said the project was a partnership between T. Y. Danjuma Foundation, the Taraba State Government and Development Africa who would subsequently manage the facility. General Danjuma urged the people of Takum to take advantage of the facility to prevent unnecessary maternal and child deaths. Governor Darius Ishaku, who also graced the event, said the project demonstrated the “Danjuma’s concern for the wellbeing of the people especially the most vulnerable in the society” and said that “the state government is pleased to identify and contribute towards this noble project”. Governor Ishaku, therefore, urged the people of the area to take the facility as their personal property that must be “guarded jealously” as a critical asset of the community.

From December 11 -13, the Presidential Committee on North-East Initiative (PCNI) in collaboration with the Victims Support Fund conducted a three-day capacity building training workshop for 40 new media practitioners in Borno.

The theme of the workshop is “Utilizing New Media for Humanitarian and Developmental Reportage.” While inaugurating the event, the Vice Chairman of PCNI and VSF, Tijjani M. Tumsah, said the training was designed to expose reporters to best practices in reporting and use of new media in information dissemination. He added that the training would assist in promoting hope, dignity, peaceful and harmonious coexistence in the North East.

The VSF Director of Programmes, Professor Nana Tanko, disclosed that similar workshops will be conducted in the six states of the region to build capacity of practitioners and ensure that their reportage enhances the visibility of interventions on the ground. At the close of the event, the participants received certificates on successful completion of the course, expressed appreciation to PCNI and the VSF for the initiative. Subsequent workshops will be held in Yobe and Adamawa states at dates that will be announced in future.

The Food and Agriculture Organization (FAO) of the United Nations (UN) has launched its dry season emergency livelihoods programme in the three States most affected by insurgency in Northeast Nigeria, with the goal to rapidly boost food production and strengthen communities’ resilience in the face of the crisis.

Some 117,000 farming families (representing 760,000 people) are targeted to benefit from the support. Farmers received seeds, rice and fertilizers, along with irrigation equipment, training and micro–gardening support to increase cultivation, reduce the impact of the food crisis and improve the nutrition of families facing severe hunger.

FAO’s Representative to Nigeria, Mr. Suffyan Koroma, co-led the launching ceremonies and emphasized that “FAO’s support to food insecure populations in northeastern Nigeria focuses on helping affected communities to quickly meet their own food needs through their own production and ultimately contribute to building their resilience to future crisis”.

In 2017, FAO is assisting more than 1.5 million people, focusing on internally displaced populations (IDPs), returnees and host communities, in the north eastern states of Adamawa, Borno and Yobe under emergency. FAO’s efforts support the Government’s wider efforts to restore livelihoods and address critical levels of food insecurity and malnutrition in areas affected by the Boko Haram–related violence. FAO’s efforts to build resilience of communities and build a hunger free world have been made possible with generous financial support of donors. The funding comes from the Government of Belgium, CERF (Central Emergency and Relief Fund of the UN), ECHO, France, Germany, Ireland, Norway, OFDA, SIDA and Switzerland.

NEWER POSTWe Did Not Attack Any Community in Katsina-Ala Says @HQNigerianArmy
OLDER POSTSMEDAN: Micro Enterprises to get Succor