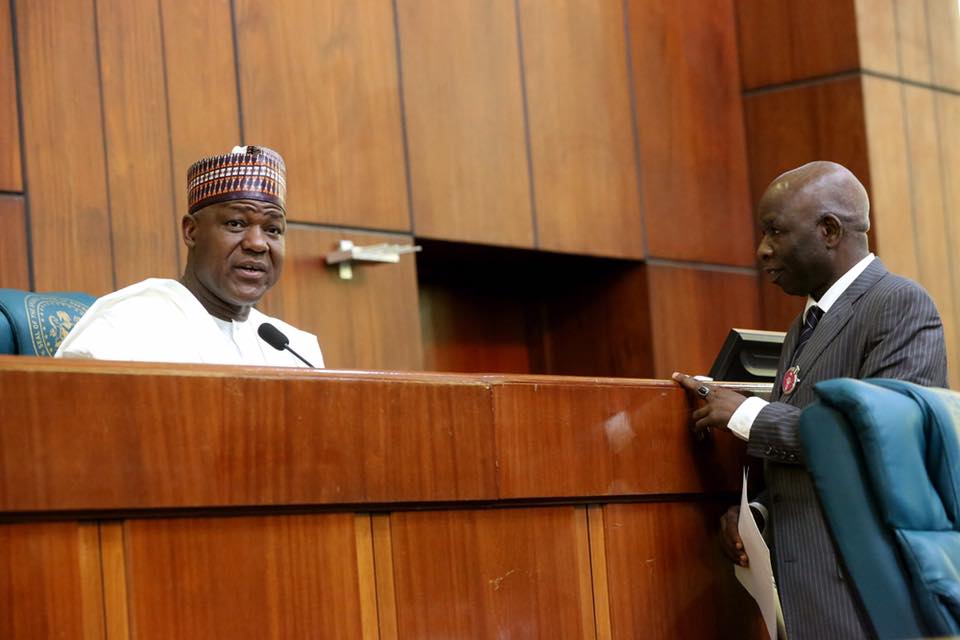 Plenary proceedings of the House of Representatives for Wednesday, December 20, 2017. The Speaker of the House, Rt. Hon. Yakubu Dogara presiding

After the Speaker led the opening prayer, he went on to examine and adopt plenary votes and proceedings for Tuesday, December 19, 2017

(a)​A Bill for an Act to Amend the Environmental Impact Assessment Act, Cap. E12, Laws of the Federation of Nigeria, 2004 to Ensure that Persons to be Affected by a Proposed Project are involved in the Decision Making in order to Ensure Remediation of the Environment; and for Other Related Matters (HB. 414) (Hon. Bede Uchenna Eke); and

(b)​A Bill for an Act to Amend the Environmental Impact Assessment Act, Cap. E12, Laws of the Federation of Nigeria, 2004 to make it Responsive by Ensuring that Project Developers, Approving Authorities and Persons whose Livelihood will be Affected by Proposed Projects are involved in the Decision Making to Safeguard the Environment and Ensure Adequate Remediation of the Environment among others; and for Related Matters (HB.977) (Hon. Samuel Ikon). 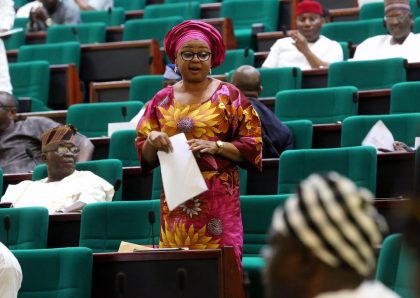 4.​ Discharge of the Committee on Solid Minerals Development on a Bill for an Act to Provide for the Establishment of Nigerian Institute of Mining and Geosciences, Jos; and for Related Matters (HB. 770), Pursuant to Order Seventeen, Rule 3 (g) of the Standing Orders of the House of Representatives:
Hon. Solomon Maren:

Notes that the Bill for an Act to Provide for the Establishment of Nigerian Institute of Mining and Geosciences, Jos; and for Related Matters was introduced on September 21, 2016 and read the Second time on 24 November, 2016;

Recalls that the Bill was referred to the Committee on Solid Minerals Development for further legislative action;

Aware that the Committee is yet to present a report on the Bill, contrary to the provisions of Order Seventeen, Rule 3 (g) of the Standing Orders of the House of Representatives to wit:

Hon. Maren stated that since the referral, little or nothing has been done on the matter, meaning there is evidently nothing to add. The Bill is aimed at legalizing the Institution and Government will not have to expend extra funds as the School is functional. All it requires is the Legal backing. He prayed the House to refer the matter to the Committee of the Whole for the required Legislative attention. The Motion was put to a vote and passed.

Notes that telephone number masking via Voice-Over-IP Technology makes it possible for fraudsters, criminals and terrorists from anywhere in the world to reach out and talk to anyone on their phones;

Also notes that those shady characters can easily hide their identities or pretend to be someone else because many consumer service companies and government agencies use phone calls as a way to confirm identities and other verifications and this poses a major threat to cyber security;

Aware that the porous nature of the system has led to numerous scams against consumers and financial institutions, as well as allowed hackers to sometimes abuse the password recovery features of online services and in the process, wrestle control of a victim’s accounts;

Also aware that with Voice-Over-IP Technology, international calls made from anywhere in the world are routed and can be shown as local calls, thereby displaying local Global System of Mobile Communications (GSM) numbers by telecommunications service providers in Nigeria;

Concerned that the termination fee for those international inbound calls routed as local calls are also tariffed as local calls by telecommunications service providers in Nigeria, thereby decreasing the accruable revenues remitted to the federal government;

Also concerned that in the absence of an effective monitoring mechanism to checkmate it, the trend poses a threat to our national security and hinders remittance of accruable revenues from the telecommunications industry; 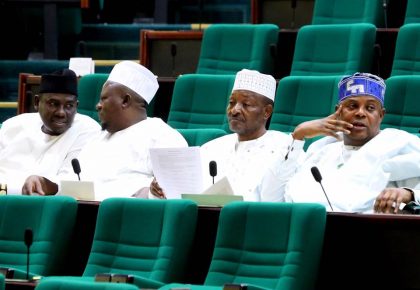 Hon. Fijabi in leading the debate stated that the problem is the fact that some individuals seem to be short-changing the Government by charging lower for such calls in the first place. He also stated that for the reason of national security, it is good for Security / Intelligence Agencies and indeed Nigerians to know the identity of those calling them, and from where they are truly calling from.

Notes that an alarming 1.3 million new graduates pass out every year from the National Youth Service Scheme and that there are about 20 million unemployed graduates in Nigeria at the moment;

Also notes that the above number does not include those graduates who were excluded from the national service on account of age or who attended other institutions of higher learning that do not present candidates for the national service, such as holders of the Ordinary National Diploma (OND), National Certificate in Education (NCE) and those who attended the National Open University;

Further notes that as a result of the collapse and closure of many industries that would have employed those graduates, they are now left to roam the streets of major cities in search of unavailable jobs, in the process, are exposed to the risks of kidnaping, prostitution, cultism, armed robbery and other sundry crimes, as well as falling prey to the antics of employment scammers who take advantage of their desperation to exploit them;

Aware that many States of the federation are dependent on allocations from the federation account for running the States, and recently, on bail out funds to pay salaries of workers, as a result, cannot be looked upon to provide employment for their graduates;

Recognises that the Federal Government had initiated certain programs such as the N-power and You Win to cushion the effects of unemployment on the graduates, but it is like a drop in the ocean in comparison with the number who do not have access to the portals on which those opportunities are advertised;

Also aware that other programs that would have more effects would be the out growers scheme and school feeding programs but the expected corresponding link between those programs and employment opportunities inherent in them, such as engagement of caterers which is expected to lead to:

(i)​ increase in food production,

Further aware that majority of the graduates lack the technical knowledge and capacity to become self-employed or to create employment opportunities for others, and the system of farming and agriculture in the country is obsolete and lacking modern mechanism, thus becoming unattractive to the graduates as an employment option;

Cognizant that unless the federal government takes drastic steps towards redirecting this trend, the country will continue to experience geometric rise in ritual killings involving young people, brigandage, internet fraud, terrorism and other sundry crimes;

Also cognizant that those steps will help reduce the country’s dependence on imports, increase income and gross domestic product of the country, boost the foreign reserves, thus leading to economic buoyancy and reducing dependence on oil as the major income earner for the country;

(a)​ urge the Federal Government to:

(i)​ initiate a process of bailing out specific and critical industries in the country in order to reduce the huge unemployment among the youth,

(ii)​ devise strategies that will lead to improvement in power supply, especially to serve the industries so as to prevent them from going under due to the high cost of power,

(iii)​ design a special bail out strategy for ailing and collapsed industries (both publicly quoted and privately owned companies) for resuscitation devoid of bureaucratic bottlenecks and demand for collateral, except with the equipment and assets of the industries,

(iv)​ apply the bail out through the Bank of Industry, the Bank of Agriculture, the Nigerian Export/ Import Bank at a single digit interest rate with three(3) years moratorium,

(v)​ include Cooperative and Micro Finance Banks in the bail out programs to lend to businesses at single digit interest rates to help boost the stock and sales of those traders,

(vi)​ appoint managers (possibly from the pool of unemployed graduates) through the participating Banks to join the Management Team of each entity to ensure the revival of the industries and full repayment of the bail out funds after which the managers will be eased out of the companies or retained on agreed terms; and

(b)​ mandate the Committees on Finance, Industry, and Labour, Employment and Productivity to devise a plan that will enable the Federal Government to actualize the bail out proposal to ailing and moribund industries in order to address the problem of unemployment in the country. 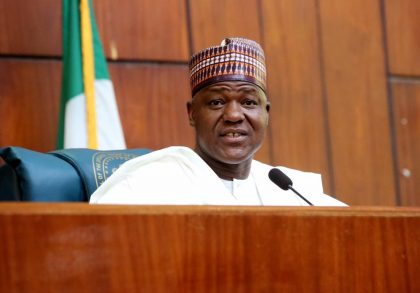 Hon. Faleke stated that the Motion is aimed at reviving the Nigerian economy by empowering the youth to be productive and the impact has a hydra effect. He bemoaned the fact that unemployment has reduced the self esteem of the Nigerian youth. He also frowned at the situation where youth seeking employment are made to pay for the jobs they seek. He also termed as unfortunate the fact that the cottage industries which used to help in employing Nigerians in large numbers before have all but disappeared. Hon. Babajimi Benson in contributing to the Motion called the unemployment situation in Nigeria endemic. He pointed to the Power Sector as a key component in achieving the progress and development in empowering Nigerians. He stated that Power is essential as it enhances and eases development of all Sectors. Hon. Aminu Shehu Shagari stated that if resources of economic progress are developed and rightly applied, progress and development of all Sectors of Nigeria will be easy, and Nigeria and indeed Nigerians will be the better for it.

Consideration of all reports stepped down to the next Legislative day.

The House adjourned Plenary till Thursday, December 21 by 11:00 Am