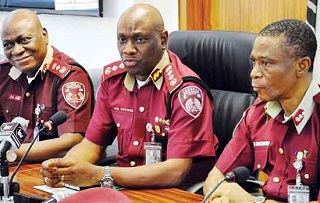 The Corps Marshal, Federal Road Safety Corps, (FRSC) , Dr Boboye Oyeyemi has approved the promotion of 685 Marshal Inspectors and 942 Road Marshal Assistants, urging them to re-dedicate themselves to  duty.

The Corps Public Education Officer, Mr Bisi Kazeem, disclosed this in a statement on Saturday in Abuja.

Kazeem said the Secretary to the Government of the Federation, Mr Boss Mustapha had also approved promotion of the Zonal Commanding Officer of the Corps in Charge of Zone RS3HQ, Abubakar Ringim to the rank of the Deputy Corps Marshal (DCM).

Mustapha equally approved the promotion of 298 officers of the corps, bringing the total number of the newly promoted officers to 1, 925.

Oyeyemi also commended the performance of the newly promoted officers and Marshals of the Corps, and urged them to put in their best in the discharge of their duties as they assume higher responsibility in their career.

The Corps marshal urged them to be of good character as well as work hard to achieve the mandate of the Corps which was aimed at combating road accidents by 15 per cent and fatality by 25 per cent yearly. (NAN)