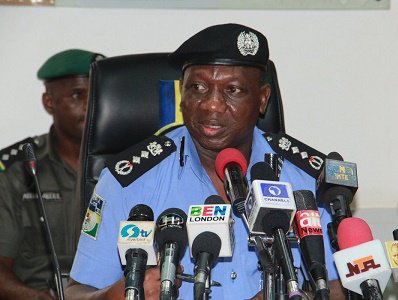 Update from The Office of IGP on Benue, Rivers States and Other Killings

The Inspector General of Police, IGP Ibrahim K. Idris NPM, mni, has ordered Commissioners of Police in charge of Benue, Rivers and other contiguous States to the two States and their Supervising Assistant Inspectors General of Police and their personnel to be on red-alert with immediate effect to nip in the bud and prevent further attacks on innocent Nigerians by suspected herdsmen and other criminal elements in the mentioned States.

To this end, the Deputy Inspector General of Police Operations has been dispatched by the IGP to Benue State to muster, coordinate and supervise the implementation of the new security strategies put in place by the Force to put an immediate end to the senseless killings and violence unleashed on innocent Nigerians by suspected herdsmen and other criminal elements in the two States.

Police Aerial Surveillance Helicopters, Five (5) Units of Police Mobile Force; Police Special Forces have been deployed along with additional conventional Police Personnel, the Counter Terrorism Unit (CTU), Police Explosive Ordinance Department (EOD) and Special Police Joint Intelligence and Investigation Teams to Benue and Rivers State to work with the Police Personnel on the ground. Force Criminal Intelligence and Investigation Department (FCIID) Personnel. This is to bring new impetus to the efforts of the Force to nip in the bud further attacks in the mentioned states.

In Benue State, Eight (8) suspected herdsmen arrested at the scene of the killings are currently being prosecuted, Six (6) of them were remanded to Prison custody while the other two (2) suspects arrested at a different scene of crime are being arraigned in court. The Assistant Inspector General of Police in Zone 4 Makurdi and Zone 6 Calabar have been mandated by the Inspector General of Police to convey Stakeholders meetings in the affected states and also supervise the Police investigation and intelligence teams, and other Police Special Squads deployed by the IGP to the two States.

While the Nigeria Police Force deeply commiserates with the Governments and People of Benue and Rivers States over the recent killings, the Force calls for calm and support for the police personnel deployed to sustain the normalcy that has been restored in the affected States. The Force implores the people to be vigilant and security conscious. They should promptly report suspicious acts or persons to the nearest Police detachment or station for prompt action to avert untoward incidents.

The Force remains steadfast in its renewed commitment to ensure law and order and protection of lives and property of all Nigerians throughout the Country.