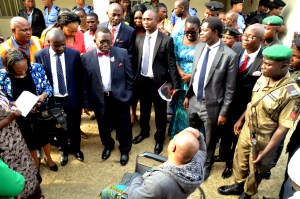 Minister Visits Libyan Returnees, Directs All to Be Screened

Boade Akinola, Abuja: The Honourable Minister of Health, Prof. Isaac Adewole has visited today, the 487 Nigerian returnees which were the second batch from Libya at the Port Harcourt International Airport, Port Harcourt.

Adewole, who had earlier sent a team from the Ministry in Abuja to strengthen the health response at the camp, said, the purpose of his visit was to ascertain the level of medical services rendered, determine if there were gaps and to emphasise the need for all the returnees to be medically screened.
Adewole said the team must ensure that the number screened tally with the expected number as contained in the manifest provided by NEMA and FAAN authorities.

In a brief interview with journalists at the camp, Prof. Adewole informed that the effort so far recorded by the combined team showed that the team was well constituted and adequate plans and preparation made for the job.

He said that, the federal government through all the relevant Agencies and the Federal Ministry of health was determined to make things better for the returnees and poised to see how they could benefit from what the country has to offer.

He furthered added that, this was an on going process of rehabilitation and reintegration of the returnees into the societies. This, he opined would rebuild hope and confidence in them as they got settled to start life afresh.

At the NAPTIP stand, the Minister advised that, a counselling unit must be set up to provide psycho-social services, in that, quite a number of them must have been traumatized by the unwholesome experience they suffered while in libya.

He also noted that, the medical team at the camp needed a mobile X-tray machine and ICT unit to ensure proper and thorough screening and documentation.

In his word, ”this is the only way to achieve a comprehensive medical screening and also decongest the UPTH as some medical cases could be handled at the camp thereby reducing the number of the referrals to the Teaching hospital”.

Commending the NEMA staff for their commitment and dedication, he advised them to reach out to State Governors who were yet to pick up there indigenes who were medically cleared and fit to be reintegrated into the society.

He however stressed that, they had to be a pool for the screened returnees ready to be picked up and proper contact established with their relatives.

According to the representative of the acting Chief Medical Director (CMD) UPTH, Dr. Ucheli Emmanuel, the screening and medical review of the returnees were to safeguard Public health and to avoid an outbreak of any unforeseen epidemic in the country. He revealed that some of the returnee’s medical challenges as diagnosed by the medical team were common infections, trauma, septic abortions, seizures and psychotic problems; following these 10 has been hospitalised.