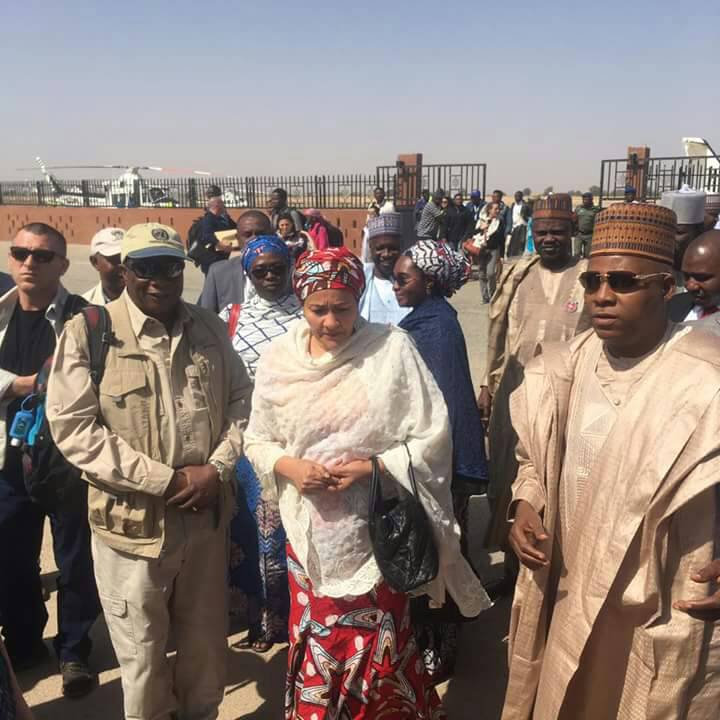 Isa Gusau, Maiduguri: Deputy Secretary General of the United Nations, Hajiya Amina Mohammed passed the night in Borno State after assessment visit to Bama in company of Governor Kashim Shettima on Wednesday. With Bama recorded as worst destroyed by Boko Haram terrorists, the DSG said she was in the town, once occupied by Boko Haram, to assess gaps in humanitarian needs, and reconstruction efforts recorded by Government so she could report back to the UN in order to identify areas of intervention.

Borno’s Commissioner for Reconstruction, Rehabilitation and Resettlement of Boko Haram victims, Professor Babagana Umara Zulum who briefed DSG on reconstruction efforts by Borno State government, listed that 11,000 private homes, 170 classrooms and other school buildings in 11 schools, township electrification and rehabilitation of 10 boreholes have so far been achieved in Bama.

The DSG had arrived Maiduguri on Wednesday before proceeding to Bama in company of Governor Shettima, Minister of State for Budget and National Planning, Zainab Shamsuna Ahmed and Nigerian (Country) Representative of Bill and Melinda Gates Foundation, Dr. Mairo Mandara on board helicopter provided by the UN Humanitarian Air Services.
They were received by the Chairman of Bama Local Government, Alhaji Baba Shehu Gulumba at the Bama Stadium where the chopper landed.

The delegation’s first point of call was the headquarters of the 21 Armored Brigade where they were received by the Brigade Commander Brigadier General G.B Audu, represented by the Brigade’s Chief of Staff, Col. A.A Adekeye. He briefed the DSG of military’s operations in clearance of mines, providing security to IDP, providing support for the unaccompanied children as well as providing free medical healthcare.

The military declared Bama largely safe but noted challenges around farmlands located in bushes, where there is need for more clearance of possible land mines. ‎The commander solicited UN’s support in the area of clearing mines around farmlands to fast track return of IDP.

The focal person of Camp, Mr. Johnson Owocho of IOM informed the DSG that the Camp had 15,770 IDP in 5,111 households.

The delegation visited a school in session where 4,503 displaced children were undergoing education with the school’s head Master Mallam Mustapha Mohammad working with 46 teachers.

At the school, Governor Shettima ordered release of 250 bags of rice and 50 bags of beans to enable pupils start benefiting from daily meal per student to boost nutrition and encourage good learning outcomes. ‎The Governor also ordered release of free uniforms to all 4,503 pupils while he directed all teachers under the primary education in Bama to return to in order to increase number of teachers in IDP schools.

After leaving the school, the DSG inspected a Community clinic for Management of Acute Mal-nutrition, and a psycho-social support centre within an IDP camp.

‎Amina Mohammed promised to report her findings to the UN headquarters in New York, United States of America with a view to having interventions from the UN scaled up to complete efforts of Borno State Government, the Federal Government, and any partner involved in providing support.

The DSG was scheduled to pay ‎a courtesy call at the Government House on Thursday afternoon.

Our correspondent reports that about one million private houses, 665 Government buildings, 5,335 classrooms, 201 healthcare centres, ‎776 electricity installations were recorded destroyed by Boko Haram according to a Recovery and Peace Building Assessment Report released in 2016, which was jointly authored by the World Bank, the European Union, the Nigerian Presidency, Government of six States in the northeast, and other local and international stakeholders.