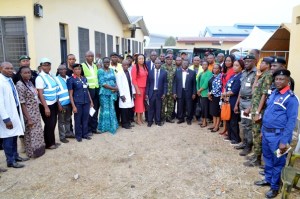 Boade Akinola, Abuja: The Honourable Minister, Health, Prof. Isaac Adewole, has warned the general public against stigmatizing the returnees who are arriving Nigeria from Libya to reunite with their families in various states across the country. The Minister issued this warning yesterday, during a stakeholder’s meeting held at the returnees’ camp in Port Harcourt, Rivers State.

Professor Adewole, advised the public not to condemn the returnees for their mistakes which he said, was caused by ignorance. He also said stakeholders should ensure that the returnees were given good accommodation and proper feeding.

Adewole therefore urged the stakeholders made up of National Emergency Management Agency (NEMA), Federal Ministry of Health, the Red Cross Society, Nigeria, Federal Airport Authority of Nigeria (FAAN), the Nigerian Immigration Service, the Nigerian Police Force, Rivers State Command, the University of Port Harcourt Teaching Hospital, National Agency for the Prohibition of Trafficking in Persons (NAPTIP) and enlightened members of the public to educate the masses on happenings around the world to forestall similar occurrence in the future.

The Minister stressed that the primary responsibility of the federal government of Nigeria and its agencies towards the returnees involved linking them with government social engagement programmes, providing jobs and skill acquisition.

“They must be involved in one skill or the other, some of them could be trained on various types of farming”.

On those hospitalized for various medical problems, he said, “these are President Muhammadu Buhari’s children thus the management of University of Port Harcourt Teaching Hospital (UPTH) should spare nothing in treating them”. The minister said he would disburse the 4 million naira earlier pledged to the teaching hospital, when it is released. “Funds must not be a hindrance” he emphasized.

Adewole further commended the stakeholders for doing the nation proud adding that they should keep the flag flying as they tolerate friction which was inevitable in any group interaction.

Taking turns to debrief the Honourable Minister, the Acting Chief Medical Director of UPTH, Dr. Charles I. Tobin West said that the hospital was equal to the task because it is blessed with sufficient manpower. He explained that the services of socio social counseling experts and psychologists had been engaged and medical records were being kept in accordance with standard practice. He also added that the hospital was already treating and feeding those hospitalized free of charge.

Also speaking, the Director of Search and Rescue, National Emergency Management Agency (NEMA) and Commander of Libya operation, Air Commodore Sonny Paul Ohemu, narrated the challenges the agency was encountering in gathering the willing Nigerian returnees in Libya and getting a willing airline to airlift them despite the fact that Aviation insurance policy does not cover Airlines that fly in Libya.