We Will Not Be Intimidated, NLC tells El-Rufa’i 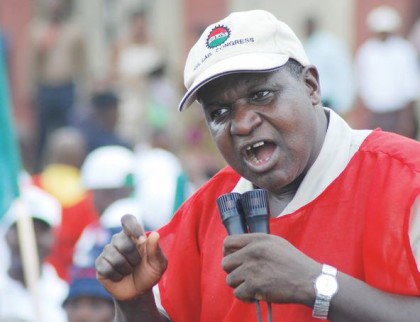 President of the Nigeria Labour Congress (NLC), Ayuba Waba on Thursday said the organised labour would not be intimidated by anybody in the pursuit of its legitimate rights.

Waba who led thousands of workers to Government House, Kaduna said the union would not back down in its opposition to the sack of 36,000 workers by Gov. Nasiru El-Rufa’i.

The NLC president accused the governor of disobeying court order and using the security agencies to intimidate the workers who were on peaceful protest.

According to him, information about competency bandied by the governor as excuse for the sack was false but a predetermined agenda to reduce the state workforce.

“The sack of 36,000 workers has nothing to do with competency; Kaduna state government didn’t conduct competency test for local government workers yet they were sacked.

“We are here to defend the right of 36,000 workers and their families that have been disengaged from the state civil service.

“The last time we were here we talked of only 21,000 teachers, but today as we speak over 4,000 local government workers have been issued sack letters, and over 8,000 from ministries, department and agencies including tertiary institutions have been sacked.

“This is cruelty, as this is not what we bargained for and we can’t keep quiet in a decent society where this is happening.

“We have now tested the waters and the struggle will be carried out to every state.

“In Kaduna state no worker is safe, no family is safe and it is better they are defeated struggling than to be defeated in their comfort zone.

“Injury to one is an injury to all and I am happy that our unions are here in full force to support us.

“This solidarity must continue because today is for Kaduna workers and tomorrow can be workers in other states.’’

Wamba condemned the deployment of security to the rally, saying “deploying security agencies with arms to armless workers is condemnable even globally.’’

He recalled that El-Rufa’i was a beneficiary of freedom of association including protests organised by the NLC in the past.

“We wrote to the Governor officially we are going to deliver our letter of protest but here we are because they are not connected to the people, relating with the people and have no concern for the people that is why they are not here.

“In 2012 governor El-Rufai joined us in a struggle where he was given T-shirt and Cap, the picture is there in the social media.

“Today he cannot come back after using and exercising this fundamental human right to deny citizens of that same right.

“NUT have gone to court and have gotten a restraining order to say that no teacher out of the 21,000 should be sacked until the case is determined, but he has refused to respect the rule of law.

The NLC president called on civil society organisations to rise and defend the Constitution, as well as strategise for the struggle.

The News Agency of Nigeria (NAN) reports that the procession went through Muhammadu Buhari to Ahmadu Bello way through to the Government House.

Alhaji Saidu Adamu, Councillor for Information and Communication, received the labour leaders at the gate of the Government House and pledged that their message would be delivered to the governor who was away on official trip. (NAN)