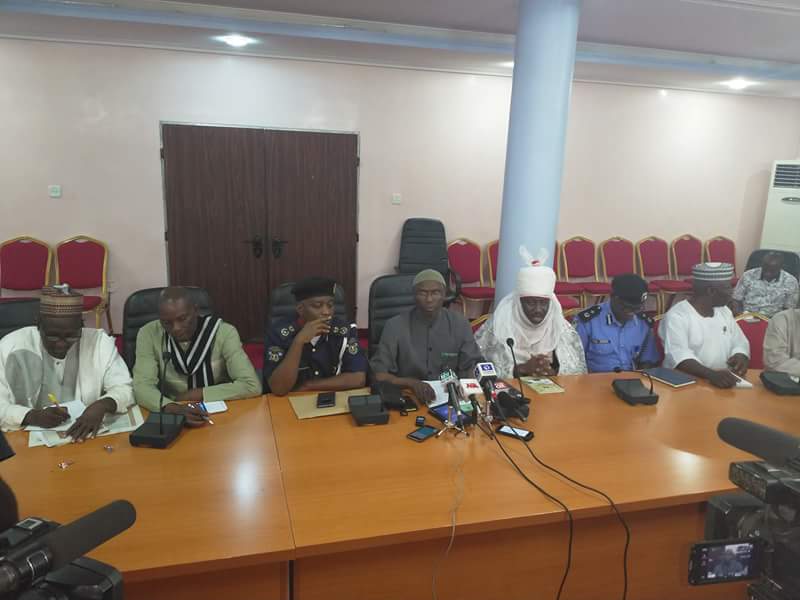 Brigadier General Mohammed ibn Umar Adeka (rtd) explained that the meeting was to discuss the security challenges in respect to the vents happening at the Nasarawa Benue boarders, around Awe and Keana LGA where there were currently 11 IDP camps with over 18, 000 persons mostly of Tiv nationality .

The Security Adviser stated that part of the resolution was to state the realities on ground and the efforts being made by the Nasarawa state Government to take care of the situation , further stating that this press briefing is not a attempt to respond to any rumour being peddled from any quarters .

As a responsible government the Governor of Nasaarawa state Governor Umaru Tanko Almakura called this meeting to trash out all the issues with a view to handling the IDP in the best way, of these IDPs some are displaced persons from Nasarawa state and the bulk from, Benue state , with over 500 IPD from Guma LGA of Benue who are all camped in the peaceful Tunga , Awe, and Keana.

Ta’al Circle reports part of the resolutions reached was that more security personnel would be deployed which would cut across the Nigerian Police Force , the DSS, the Nigerian Army and the NSCDC when it is officially approved by Mr. President ,
Because of the challenges more logistic support would be made available to the security operatives , the traditional rulers and the IMC chairmen and overseers of affected LGAs and Development Areas.

Parents have been encouraged not to prevent their children from going to school because of rumours being peddled calling for it to be clear the Fulani and tiv are not fighting in Nasarawa state, they are all living peacefully however some hoodlums have been using roumors as a chance to loot property .

The Nasarawa strategy for community based resolution was decided to be used due to lts past successes in the state. Where dialogue is the best solution to resolving issues for time to time.

The Fulani’s were among the nationalities that were protecting the IDPs contrary to the rumours being peddled .

Also speaking the TIDA Chairman made it known that the Tiv people were being displaced by some terrorist following such events the Tiv are running way and are being camped in Awe , Azara and Keana, where he said the Nasarawa State Government was helping a lot by proving shelter , security and relief ,materials to the IDPs as well as the provision of the mi bile hospital to treat the people .

The Sarkin Tunga made it known that they had put up a monitoring strategy that was anchored on vigilance to detect strangers and take proper action . Stating that ther had ways odf detecting foreign persons .

The Chairman Miyetti Allah made it known that the Fulani in Nasarawa state were not fighting with the Tiv or any other person but rather working to guard the Tiv communities using their vigilante group to assist and protect them for those trying to steal their properties.