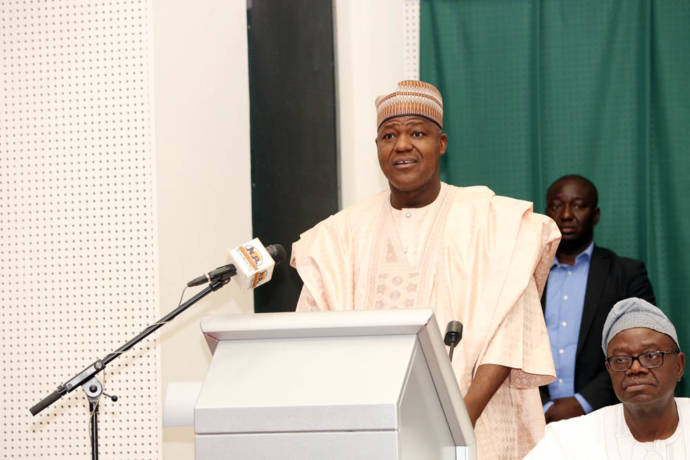 I am particularly pleased to note that the Media in the 21st Century has witnessed revolutionary transformations and re-engineering especially with the advent and the resultant creativity experienced in both the conventional and social media platforms. This transformation has indeed brought to the fore the need for Media professionals and practitioners, especially those involved in Legislative reportage, to lay special emphasis on the peculiarities of Legislative practices in order to ensure effective Legislative reportage in the evolving Media.

There is no doubt in my mind that this retreat is timely in view of the need for Media practitioners to chart a new course in effectively reporting the Legislature as it strives to ensure good government and transparency. The relevance of this training is apt, and cannot be over-emphasised, as engaging citizenry in popular participation remains a key index in the assessment of any democracy.

The importance of the media in enhancing effective representation of constituents, creating advocacy on pro-poor and national issues and holding the arms of government accountable in line with Section 22 of the 1999 Constitution. The context of which is encapsulated when Mark Twain stated that:
“There are only two forces that can carry light to all the corners of the globe… the sun in the heavens and the Associated Press down here” at an annual dinner of the Associated Press in New York in 1906.

In recent times, the role of the Media goes beyond news reporting. Investigative journalism seems to be more desirable. In other climes, the media appears to play a more pivotal role in finding the facts and figures of any story; stories are not based on mere speculation but are thoroughly investigated. It will be recalled that in November 2017, the Cable News Network produced an exclusive report that exposed migrant slave auctioning of Sub-Saharan Africans in Libya leading to worldwide protests and repatriation of African citizens by their home countries. The exposure of the deaths of Nigerian girls on the Mediterranean Sea by the international media has also provoked national discussions on the strengthening of border control, security and effective governance.

The Media profession is a noble one and one whose integrity should be protected. As much as we all like to savour good news, things can go wrong. Mistakes, problems, errors of judgment and political controversies come along once in a while and with them can come media attention.

Objectivity should be the sole of the business of the press, especially when reporting the Legislature. It is important that the happenings and events in the Legislature are properly reported to avoid public backlash that could cause discontent and misunderstanding of the intents of the Legislature at any given situation.

The reality of the Nigerian situation is that the Legislature is statutorily empowered to serve as checks and balances to the other Arms of Government, yet, this is not fully understood by the citizenry. This therefore underscores the importance of enhancing the capacity of members of the House of Representatives Press Corps as they collaborate with the Legislature in ensuring that Legislative activities are effectively reported.

The legislature is the institution that represents and protects democracy without which we will have dictatorship. Thus, the mass media should partner with us to deepen democracy, check abuses in government and enthrone rule of law and transparency in our polity. In doing this, we don’t expect you to sing our praises but give us fair, balanced reportage and constructive criticism of our activities.

Almost two decades after Nigeria returned to civil rule, it still appears that we are still having hangover of military rule as some are yet to come to terms with the reality of the pivotal place and role of the legislature in a democracy. We urge the media to help in sensitizing Nigerians on the powers, functions and responsibilities of the legislature in democracy.

We are ever committed to providing legislative support and framework that will enhance freedom of speech and expression as provided for in the 1999 Constitution. This informed the reason for the passage of the Freedom of Information Act in 2011.

It is my hope that this capacity development will enhance the work that the Press Corps is doing in the National Assembly and that assessment and reassessment of the work would be done and good practices agreed on at the end of the meeting on how to make the work more efficient and on how to present the National Assembly in a better position for the general public to understand the work of the legislature and appreciate it more.

I wish to assure you all that the leadership of the House of Representatives notes with keen interest the efforts made by members of the Press Corps in their quest to partner with the House in deepening democracy and good governance.

Before I conclude my address, may I appeal to the proprietors of media organisations to endeavour to pay salaries and other entitlements of their staff. It is the only ethical and proper thing to do. Yes, you are watchdogs of the society. That also places a huge burden on you to act in an exemplary manner.

Finally, I wish to appreciate the management of the House of Representatives, the House Committee on Media and Publicity, the Policy and Advocacy Centre (PLAC) and the UK Department for International Development (DFID) for organising this retreat.

May I therefore, formally declare this retreat open.

God bless you all and the Federal Republic of Nigeria.