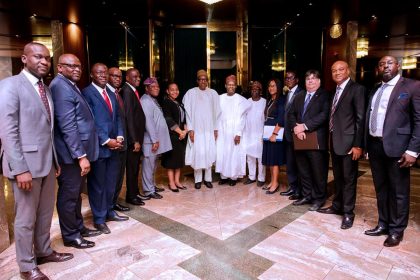 President Muhammadu Buhari Monday in Abuja said his administration remains resolute and focused on delivering on the three-pronged promises of securing the lives and properties of Nigerians, halting the pillage of the economy by corrupt public officials, and creating employment opportunities for the youths.

Receiving the Board of Directors of the Nigerian Economic Summit Group at the State House, President Buhari said the initial economic challenge posed by recession was already dwindling, with the economy smarting out and posting better results on falling inflation rates, higher foreign reserve and better ranking on ease of doing business.

“If you look critically into the 2018 budget, we have already taken into account key issues of more stable electricity, construction of roads and rails, and the airport concession’’ he said.

The President said the government will work more to accelerate and increase momentum in agriculture, power, gas, manufacturing and processing, while commending the Chinese government for its support in improving infrastructure in Nigeria.

“We send our gratitude to the Chinese for all their support to Nigeria. Since Independence, no country has helped our country on infrastructural development like the Chinese. In some projects, the Chinese help us with 85 per cent payment, and soft loans that span 20 years. No country has done that for us,’’ he said.

The President assured Nigerians that the rising attacks on communities by herdsmen will soon be brought under control by security forces deployed to the vulnerable areas across the country.

He said the unfortunate incident of attacks, which had resulted in loss of lives and properties, had already brought sorrow and hardship on many Nigerians, with the government deeply affected.

President Buhari said the government will continue to strengthen its relationship with the NESG, especially in integrating its recommendations into policies that will improve the livelihood of all Nigerians.

In his remark, the chairman of the NESG Board of Directors, Kyari Abba Bukar, commended the government for the “pragmatic approach’’ in engaging with citizens of Niger Delta region which had translated into steady rise in oil production.

“Your Excellency, we salute your courage in providing support to the states that have had fiscal challenges. We recognise that without the intervention of the Presidency, many state governments would have been unable to pay salaries last year,’’ he said.

Bukar said the outlook on the economy remained upwardly positive, projecting a 3.5 per cent GDP growth, urging the President to pay more attention on the herdsmen attacks, which could reverse the gains recorded in the agricultural sector.