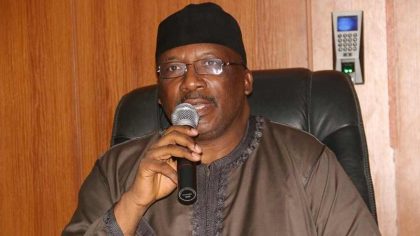 The Minister of Interior, retired Lt.-Gen. Abdulrahman Dambazau, on Tuesday in Abuja, held a crucial closed-door meeting with heads of internal security agencies over the security challenges in the country.

Speaking before the meeting, Dambazau expressed concern over the current security situation in the country.

He said that the meeting was a follow-up to a meeting with state governors two weeks ago over the violent conflicts  between farmers and headers in Benue and other places.

“One of the issues that came up in the communiqué was the issue of the proliferation of  small arms and drug trafficking and abuse.

“We also found out that these two issues are triggers to the violence taking place in this country,“he said.

He said that without firearms and drugs, those perpetrating the violence would not have the courage to do so with such magnitude as seen.

“Without the fire arms and drugs, those who partake in violence would not have the courage to carry out the kind of violence taking place  in this country,“he said.

The minister said that there was need to take urgent steps toward ensuring that the situation was dealt with accordingly.

“As a follow-up I called for this meeting so that we can examine and analyse (the situation) to see how best we can deal with the situation,“ he said.

He said that according to the UN Regional Centre for Peace and Disarmament, there were approximately 500 million assorted fire arms in West Africa and out of this figure, 350 million (representing 70 per cent) are in Nigeria.

He said that a large consignment of weapons had been smuggled from North Africa (in particular Libya) as a consequence of crises in that country.

“The situation is worsened by the insurgency in the North East because of the supply of weapons to the insurgents and terrorists there.

“Likewise the supply of weapon to the militants  in the Niger Delta through exchange of stolen crude oil and supply by politicians to deal with their opponents,“he said.

He added that the issues required action especially as the 2019 elections draws nearer.

“It is very necessary for us to secure our country and of course a more challenging aspect of that which facilitate the smuggling of weapons, is our  porous borders  and this is a major challenge to the Nigeria Immigration Service (NIS) and Nigeria Custom Service in particular but to all law enforcement agencies,“he said.

He said that the about 5,000 kilometres of the country’s borders were  porous, hence the need to secure the  country and its future.

Dambazau added that with the amount of weapons and drugs coming into Nigeria, “if we don’t do something now I am afraid things would be worse than this.”

He said that the farmers/hearders conflicts, kidnapping, ethno-religious crises, terrorism, armed robbery, cultism and militancy all had something to do with weapons and drugs.

“We cannot do this without the continued partnership with state governments and religious organisations,“he said.

He said that the meeting would come up with strategies on how best to  handle the problems.

The News Agency of Nigeria (NAN) reports that a communiqué is expected at the end of the meeting. (NAN)