The Federal High Court, Abuja, has dismissed an application filed by Nnamdi Kanu, leader of Indigenous People of Biafra (IPOB),  praying the court to order the Chief of Army Staff to produce him in court. 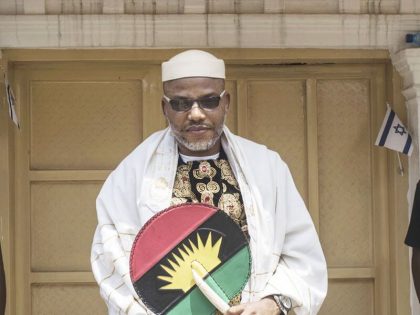 Justice Binta Nyako, delivering ruling on the application on Friday, said that Kanu had failed to prove to the court that he was last seen in the company of the army or any soldier.

According to her, the application failed and has thus been dismissed.

Nyako noted that Kanu filed the application himself and wondered how a person who was said to be missing could have done so.

Mr Ifeanyi Ejiofor, counsel to Kanu sought to know what to do to ensure that his client attended court on the next adjourned date.

But the judge said that as far as the court was concerned, his client was on bail and should be present in court on the next adjourned date to stand his criminal trial.

She said the reason for bail was to ensure that the person attended court proceedings adding that the sureties who deposed to the fact that Kanu will attend court should produce him in court.

The News Agency of Nigeria (NAN) recalls that Kanu had in 2017, filed an application praying the court to order the Chief of Army Staff to produce him in court.

Kanu was specifically seeking an order of “Habeas Corpus ”, asking  those detaining him to bring him to court.

Kanu’s application was predicated on the grounds that he was the leader of IPOB and had been missing after the Nigerian Army invaded his house in Sept. 2017.

“The applicant is the leader of IPOB, a group largely made up of people from South-Eastern part of the country.

“On Sept.14, 2017, the Nigerian Military led by soldiers of the Nigerian Army invaded the applicant’s house on a murderous raid, where life and mortar bullets were fired on unarmed and defenceless  populace, leaving 28 persons dead and abducting many.

“The applicant, who was in the house during this bloody onslaught by the Soldiers, has not been heard from or seen after this bloody attack in his home by the army.

The substantive criminal suit against Kanu was adjourned until Feb. 20.

NEWER POSTCentral Bank Intervene Inter-bank Foreign Exchange to The Tune of $304m
OLDER POSTMan, 21, Docked for Allegedly Being in Possession of Pistol