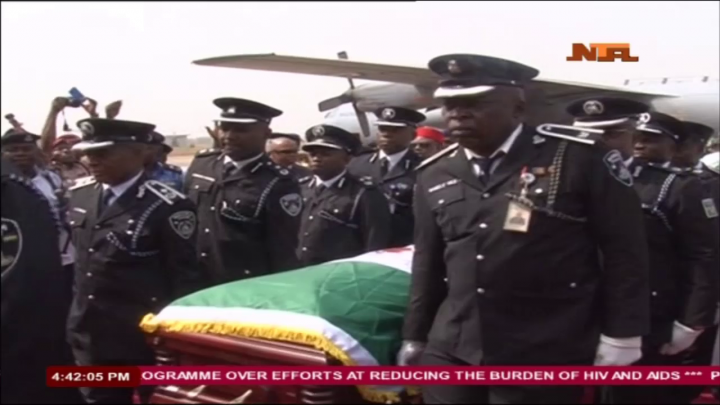 The remains of the former Vice President of Nigeria Dr. Alex Ekwueme, has been received by South East Governors and Igbo Leaders on by arrival at the Akanu Ibiam International Airport Enugu.

The brief ceremony was well attended by dignitaries and representatives of security agencies. The South-East governors, Okezie Ikpeazu of Abia state, Willie Obiano of Anambra, David Umahi of Ebonyi, Ifeanyi Ugwuanyi of Enugu and Rochas Okorocha of Imo state gave their respect to the former Nigerian number 2 citizen and leader.

Before leaving Abuja, the The Vice-President, Prof. Yemi Osinbajo, says the late former Vice-President, Dr Alex Ekueme, was committed to the unity of Nigeria throughout his lifetime. 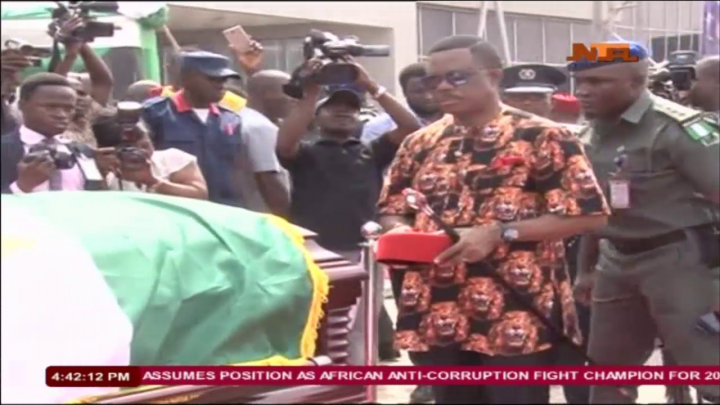 Osinbajo made the statement during a Parade of Honour for Ekwueme mounted at Nnamdi Azikiwe International Airport, Abuja, on Monday as part of the last respects by the Federal Government for him.

He expressed the hope that the death of Ekwueme would not only encourage Nigerians but cement the relationship among all of the peoples and nationalities in the country.

Osinbajo said: ‘’when he was asked what his vision were for the country, he said, ‘I would want to see Nigeria to be a nation, not just a country.’

“Those words tell us how committed he was to the unity of this country.

‘’And I pray that in death and as we remember him, this would not only encourage us but also cement the relationship between all of the peoples and nationalities of this country so that we could become and remain one.

“We are reminded of his commitment to timeless ideals of integrity, of loyalty and of kindness to all. We thank the almighty God for giving us 85 years life of Dr Ekwueme.

“We thank the almighty God for his family and all us who he has left behind and we pray that his great wishes for this nation and all that he sacrificed for will not be in vein,’’ he said.

Enugu township is presently wearing a new look following clean-up and arrangements for visitors and friends coming into the town to pay last respects to the late former Vice-President.