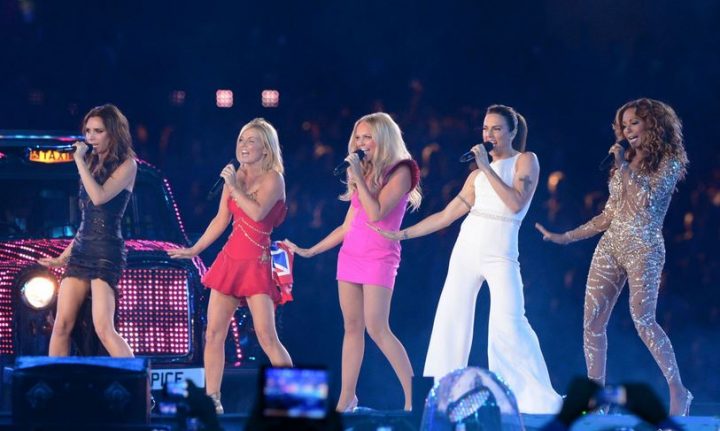 Famous British all girls musical group, Spice Girls are set for their re-union since after the 2012 Olympics performance.

“Victoria Beckham confirmed the long-awaited £50m Spice Girls reunion on Friday as the legendary girl band were seen as a five-piece for the first time in six years.” MailOnline reports.

Mailonline also reports that 43-year-old shared a picture of them as a five-piece on Instagram shortly afterwards, writing the caption: Love my girls!!! So many kisses!!! X Exciting x.’

Geri Horner, 45, and Mel C, 44, were the first band members pictured ahead of the meeting, which was held at Geri’s Hertfordshire home, with Mel B, 42, arriving shortly afterwards.

Emma Bunton, 42, and Victoria were both only pictured leaving the property, leaving their fans guessing for hours whether or not they were present.

Geri was seen arriving at the property in her silver car, and she wound her window down, while wearing a big smile on her face.

She wore a top which matched her motor perfectly as she stopped outside the property for a brief exchange with a male.

Sporty Spice, Mel C walked into the property, wearing a navy coat over a black shirt and slim-fitting trousers, as well as flat studded buckle shoes by Chloe.

Scary Spice, Mel B had jetted out of Los Angeles the day before and was pictured arriving while toting a bag and a suitcase in her trademark leopard print.

Victoria wore a roll-neck top and her trademark designer shades as she kept a low profile while vacating the property.

Dressed in a white top with a rainbow motif, she wore skinny jeans, a Hermes belt and a camo-style coat. Her suede thigh-high boots matched her coat perfectly and she carried a Gucci bag in hand.

She was accompanied by a minder, who was laden with bags from health food store Planet Organic, no doubt making sure the girls were all refreshed.

Emma, 42, was not pictured arriving, but was later seen leaving, wearing a bright blue coat over an all-black ensemble. Reports of the get together first surfaced on Thursday night. 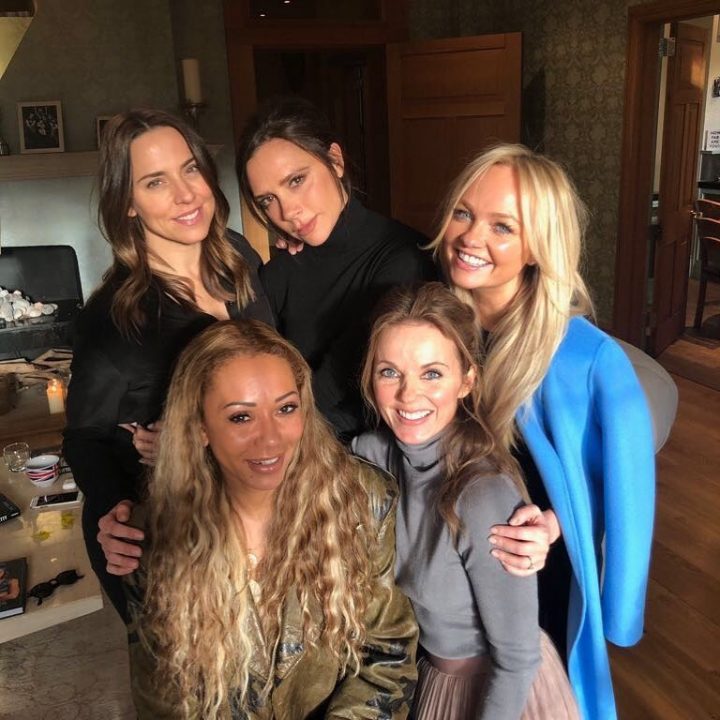 Before the meeting, Victoria was last seen the night before at the Connaught hotel in London on a date night with husband David.

Posh Spice, Victoria, has decided to complete the line-up, which will see them all pocket £10million each, on the condition that she does not have to sing. As such, the reunion is not said to be looking at performing together again.

Original manager, Simon Fuller, 57, who is also well-known for being the creator of the Idol franchise, was pictured heading inside, no doubt keen to oversee the day’s agenda.

A source told MailOnline: ‘Victoria is currently concentrating on leaving for New York fashion week on Monday. She has her final show prep to think about and a forthcoming charity field trip.’

An insider told The Sun the day before: ‘This is the pop reunion no one thought would ever happen again. But after a long period of negotiation Victoria agreed the time is right to work on new projects this year.’

However, Victoria and Geri are said to be refusing to commit to a ‘fully-fledged tour’ because of their own family commitments.

Whilst a singing tour is said to be off the table, the paper reports that projects being considered include a compilation album celebrating their greatest hits; hosting a televised talent show; endorsing products and working on shows in China; with the five all expecting to get a £10million payout each.

MailOnline has contacted each of The Spice Girls for comment.

The possibility of a Spice Girls reunion has been in the works for months, with Mel C previously revealing she opted not to join a reunion in 2016 after her bandmate Victoria decided against it.

The pair previously reunited for a world tour in 2007 and performed a medley of their greatest hits during the London Olympics Opening Ceremony in 2012.

The quintet also reunited later in the year for a press conference to promote the launch of a Spice Girls themed Viva Forever! but did not perform, and this is the last time they are all believed to have been in the same room together.