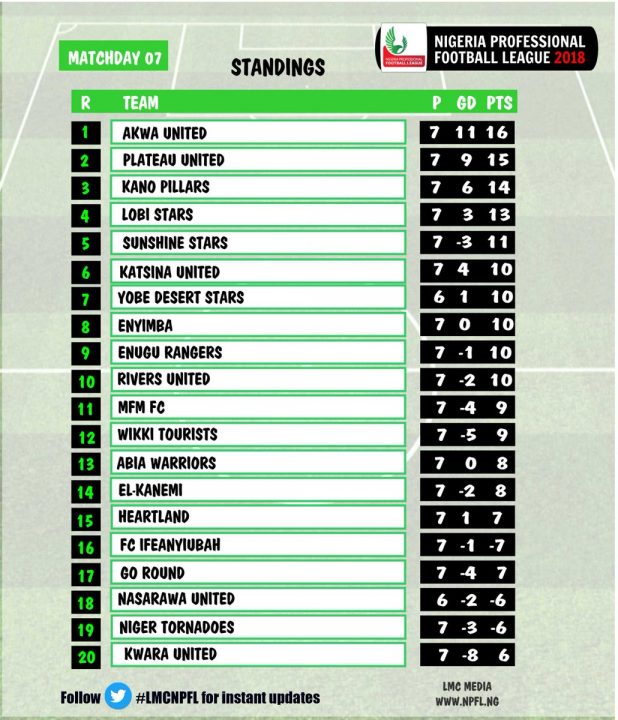 After the emphatic win at the Godswill Akpabio International Stadium in Uyo, the hosts have now garnered 16 points from seven games, one more than Plateau United FC of Jos.

The defending champions also enjoyed a comfortable afternoon with their 5-0 trouncing of Sunshine Stars FC of Akure in Jos.‎

Ubong Friday, Victor Mbaoma, Micheal Ibe and Christian Pygbara were all on target in the 14th, 67th, 82nd and 89th minutes respectively for Akwa United.

The heavy defeat suffered by Wikki Tourists saw them slipped four steps to 12th position on the NPFL log.

Plateau United were in devastating form against Sunshine Stars with new arrival Tosin Omoyele grabbing a brace in the 2nd and 80th minutes for the demolition of the Owena Waves.

The young forward has now scored three goals for the Jos-based club side this season.

Sunday Ingbede, Emeka Umeh and Mafeng Pam also scored in the 15th, 18th and 89th minutes respectively for the Jos-based side.

The champions are on the second spot on the log, while Sunshine Stars slipped to 5th position on the log.

League’s leading scorer Junior Lokosa opened scoring from the penalty kick spot in the 52nd minute, his seventh goal of the season.

Adamu Hassan made the three points safe with a fine strike in the 90th minute.

In Owerri, former champions Heartland recorded their first win of the season following a comfortable 2-0 home win against Kwara United.

Biodun Thompson netted the opener for the “Naze Millionaires’’ in the 10th minute, while Stanley Egbujor added the second 11 minutes from time.

Heartland climbed to 15th, while Kwara United dropped three steps further down to the bottom of the 20-club log.

At the Aper Aku Stadium in Makurdi, Lobi Stars secured a hard-fought 1-0 win against visiting FC IfeanyiUbah with midfielder Esosa Igbinoba getting the decisive goal in the 26th minute.

NAN also reports that FC IfeanyiUbah are now without a win in their last four games as they sit in 16th position, while Lobi Stars moved a step up to fourth on the log.

Seven-time champions Enyimba held hosts El-Kanemi Warriors to a goalless draw in Maiduguri, with Bello Kofar-mata missing a penalty kick for the hosts three minutes before the break.

Enyimba FC are now in eighth position, while El-Kanemi Warriors slipped one step down to 14th on the log.

Katsina United defeated Niger Tornadoes 2-0 at the Muhammadu Dikko Stadium, with Chinedu Ajanah and Eric Dufegha getting the goals in the 7th and 48th minutes respectively.

The Oriental derby clash between Abia Warriors and Rangers International ended in a goalless draw, while Rivers United beat Go Round FC 1-0 in the Rivers State derby.

NAN reports that a total of 17 goals were scored in nine matches played on Match Day 7, with seven home wins and two draws recorded.

The remaining Match Day 7 fixture between Nasarawa United and Yobe Desert Stars will be played at the Lafia Township Stadium on Monday.