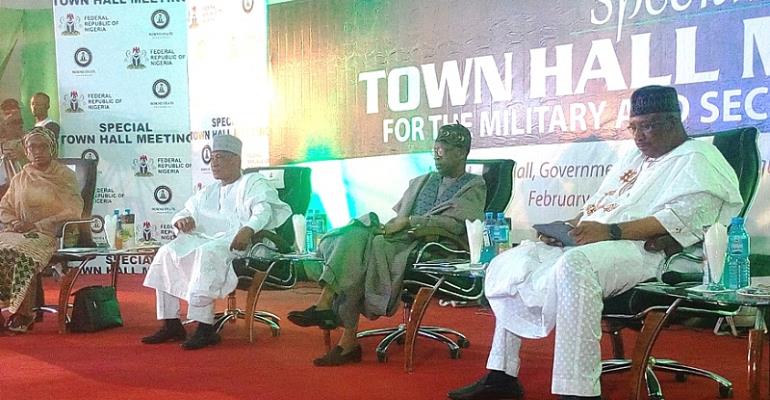 Isa Gusau, Maiduguri: A statement by PR Nigeria, a consultancy firm working with some security agencies , completely took out of context, remarks made by Governor Kashim Shettima at a special townhall meeting on in Maiduguri, which actually aimed to show Nigeria’s Unity as inherent in the military, the Chairman, Senate Committee on Defence, Senator Abubakar Kyari who attended the meeting has clarified.

Kyari, representing Borno North at the Senate was referring to media reports, which quoted PR Nigeria, claiming some senior security chiefs from Northern Nigeria were outraged when Governor Shettima purportedly said that Generals from southern Nigeria had recorded more progress in fighting Boko Haram than northerners.

The Senator said it was inconceivable to assume Governor Shettima would disparage northern Generals at a public function in the pretence of retired and serving Generals from Northern Nigeria who include the Minister of Defence, his counterpart in Interior, as well as other senior military officials from the north.

“Contrary to the distortion, Governor Kashim Shettima actually paid glowing tribute to the entire components of the Nigerian military and other security agencies for their sacrifices in the fight against Boko Haram in Borno State.

The Governor went on to highlight the Unity that is inherent in the patriotism of the military. He cited for instance that for him, service chiefs like the Chief of Army Staff, the Chief of Air Staff and their coordinator, the National Security Adviser are sons of the Northeast have very personal interest in the stability of the Northeast on the basis of their origin, as such their remarkable efforts were to be expected and that is why he has very emotional regard for Generals from the southern Nigeria who have nothing personal with the Northeast yet have devoted themselves to securing the Northeast.

The Governor explained the Unity of patriotism common with the military. This is the context as everyone understood it. It was therefore surprising to see last night’s presentation of an entirely different context. The military, from the service chiefs to all the commanders that have served in Borno, be they from the north or south, have regularly attested to Governor Shettima’s unquestionable support for the military heads and the soldiers on ground. This Governor has always supported the military since he assumed office in 2011 and as everyone has seen from his support to families of fallen heroes to other steps he has taken, he is one of the most genuine supporters of the Nigerian military.

To present Shettima as anti northern Nigeria wasn’t fair especially if one is to fairly judge the Governor’s consistency in speaking and working for the peace, Unity and progress of Northern Nigeria” the Senator said.