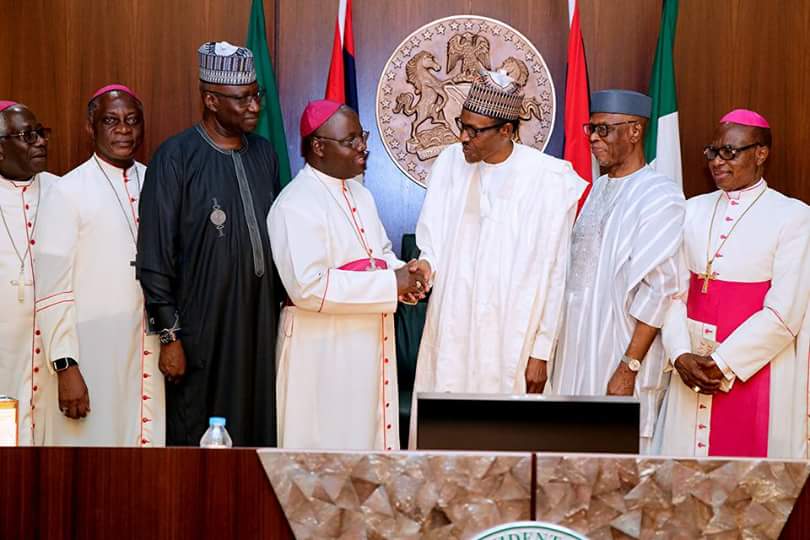 Femi Adesina, Abuja: President Muhammadu Buhari Thursday in Abuja explained that the policy proposed by Federal Government in response to the frequent clashes between herdsmen and farmers in the country is not meant to colonize any part of the country.

Receiving Catholic Bishops Conference of Nigeria (CBCN) led by Archbishop Ignatius Kaigama, President Buhari said the intention of government is to create grazing locations for cattle rearers, which has now been misconstrued as another form of colonization.

President Buhari regretted that the well-thought out policy of the Federal Government, which was conceived after wide consultations with stakeholders, had been largely misunderstood by a section of the public. 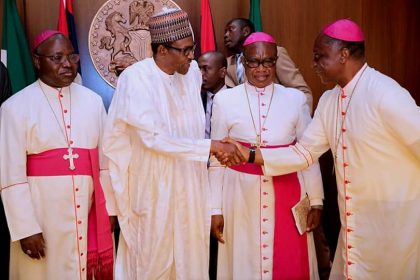 He, however, assured the Catholic Bishops that the Federal Government will continue to explore all opportunities and support initiatives to ensure peace and stability in restive areas.

Condemning recent spate of killings in Benue, Adamawa, Taraba, and Zamfara states, the President said security operatives would ensure prosecution of perpetrators and all those found with illegal arms in the affected areas.

“The impression created that I was sitting in an air-conditioned office and home, enjoying myself while these things happened, is dishonest.

“At every step, I have tried to foresee these problems because I have the experience as a former military officer who commanded three out of the four divisions of the Nigerian army, in Lagos, Ibadan and Jos.

“I am quite aware of the problems we have and I am doing my best to get law enforcement agencies to be on alert,’’ he said.

The President told the Catholic Bishops that he would not be tired of recounting remarkable progress recorded in the areas of security, economy and the fight against corruption.

“We have done very well on security in the North East, when you compare what the condition was before we came in and what it is now.

“On the economy, particularly agriculture, I am very pleased that God answered the prayers of Nigerians who prayed for bountiful harvest.

“People have taken advantage of Federal Government policies and programmes to return to the farm and they have not regretted,” he said.

On the fight against corruption, the President reiterated that government would be guided by the law in the investigation and prosecution of all graft-related cases.

“People are being prosecuted systematically with evidence.

“If a permanent secretary has five houses in Abuja, two in Kaduna and one in Borno and Sokoto and he can’t account for the properties and there are bank transactions linking him to the properties, the prosecuting agencies will not have difficulties to make progress on the case.”

On the question of Federal character, the President declared that no ethnic group or political zone has been deliberately marginalised in the appointments made so far.

He, however, added that he would take a second look at areas on which issues have been raised, when a compendium of all government appointments is submitted to him. 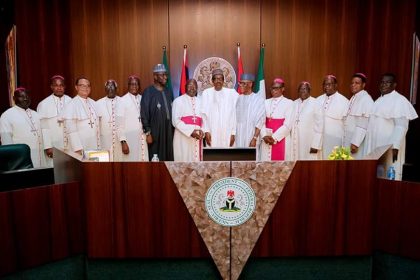 In his remarks, Archbishop Kaigama pledged that the Catholic Church in Nigeria would continue to support the Buhari administration and make its contribution to nation-building through prayers, admonitions and assistance to needy Nigerians.

“As the voice of the people, we shall continue to highlight the plight of our people and play our prophetic role of sensitising the government, thus promoting good governance, national unity and cohesion,” Kaigama said.