3 Herders Jailed 1 Year Each for Open Grazing in Benue 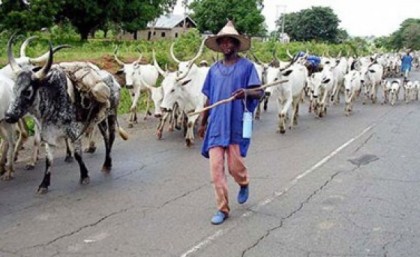 The convicts were charged with criminal conspiracy and open nomadic livestock rearing and grazing.

The offences are punishable under Sections 97 of the Penal Code and 19 (2) of the Open Grazing Prohibition Ranches Establishment Law of Benue, 2017.

The prosecutor, Insp. Michael Iorundu, told the court that the joint patrol team of `Operation Zenda,’ led by Sgt. Edward Shinyi, arrested the herders on Feb. 18.

He said that they were brought to the State Criminal and Investigation Department, Makurdi.

“The team reported that the three herders, and others now at large, were openly grazing their cattle along Yeluwata Road in Guma Local Government Area of Benue.

“When the case came up for mention, the herders pleaded guilty to the charge against them, saying that they were not aware that open grazing had been prohibited in Benue,’’ he said.

The Magistrate, Mrs Lillian Tsumba said that the herders were first offenders who were also illiterates and not even aware that open grazing has been prohibited in Benue.

Tsumba said that a law such as open grazing prohibition required massive exposure and education of persons at the grassroots.

She, however, said law is law and must be obeyed in spite ignorance.

The magistrate sentenced the herders to a year imprison each, with N500,000 option of fine each. (NAN)