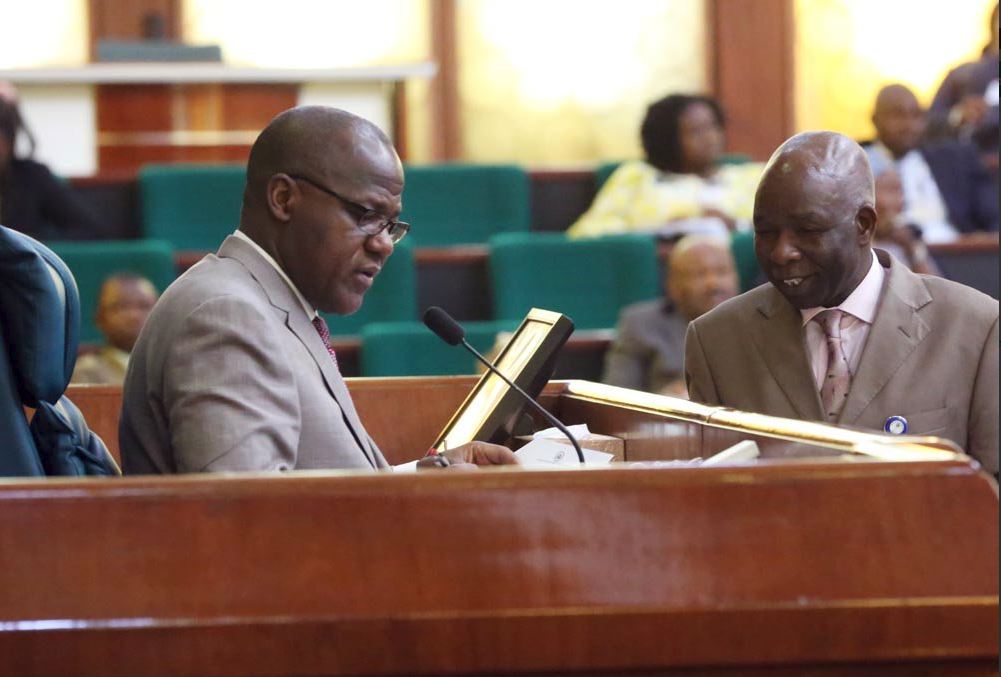 He said opening prayers and approved votes and proceedings for yesterday’s sitting.

Hon. Abiante laid a petition before the House, which was referred to the Committee on Public Petitions.

Hon. Ezenwa Francis Onyewuchi moved a motion of urgent public importance on the need to celebrate the Nigerian Labour Congress (NLC) on the occasion of their 40th anniversary. He made reference to previous unsuccessful attempts to create an umbrella body for Nigerian workers before it was finally done in 1978. He said that Labour has made immense impact on issues bordering on the welfare of the Nigerian worker, and Nigerians as a whole.

The House also adopted a motion by the Minority Whip, Hon. Yakubu Barde also moved a motion of urgent public importance on the wanton killings and destruction of property in Kajuru LGA, Kaduna state, and killings by cattle rustlers.

Admittance into the Chamber:

Five bills were presented for first reading as follows;

Ossai Nicholas Ossai and 20 Others)

Hon. Nasiru Sani Zangon Daura presented the Report of the Committee on Special Duties on a Bill for an Act to Establish the National Boundary Task Force for the Protection of Persons and Prevention of Communal Clashes and other Criminal Acts; and for Related Matters (HB. 486)”(Referred: 2/6/2016).

A Bill for an Act to Amend the National Broadcasting Commission Act, Cap. N11, Laws of the Federation of Nigeria, 2004 to Provide for Competition in Nigeria, to Promote Efficiency and Expand Opportunities for Nigerian’s participation in the World Markets while at the same time recognizing the role of Foreign Competition in Nigeria; and for Related Matters (HB. 168)

A Bill for an Act to Amend the Immigration Act, 2015 to make further Provisions to Restrict and Regulate the Issuance of Work Permit to Foreign Nationals; and for Related Matters (HB. 480)

A Bill for an Act to Regulate the Profession of Forestry to Provide for an Institute to be charged with Responsibility for the Registration, Regulation and Disciplining of Members of the Profession and to Establish a Council that may invest moneys into any Security created or issued by or on behalf of the Government of the Federation or in any other Security in Nigeria approved by the Council; and for Related Matters(HBs. 594 and 1089) (Hon. Adeyinka Ajayi and Hon. Mojeed Alabi).

Bill referred to the Committee on Environment.

Bill referred to the Committee on Governmental Affairs

Bill referred to the Committee on Commerce.

The House adopted the following motions;

Discharge of the Committee on Power on Referral on the Motion: Constitutional Breaches, Impunity and other Infractions Against the Niger Delta Power Holding Company (NDPHC) and the Need to Ensure Probity and Enforcement of Statutory Oversight Functions, Pursuant to Order Seventeen,Rule 3(1)(g) of the Standing Orders of the House of Representatives.

Notes that the Motion on the Constitutional Breaches, Impunity and other Infractions against the Niger Delta Power Holding Company (NDPHC) and the Need to Ensure Probity and Enforcement of Statutory Oversight Functions was debated on Thursday, 26 January 2017 and mandated the Committee on Power to conduct an investigative hearing involving all relevant stakeholders with a view to identifying any Constitutional Breaches and ascertain the veracity of reported infractions by the NDPHC and report to the House within six (6) weeks for further legislative action.

Aware that the matter has lingered in the Committee for more than one year without any tangible progress;

Also aware of the importance of the motion to overall development of the Power Sector in Nigeria;

Discharge the Committee on Power on the Referral and Recommit the Resolution to an Ad-hoc Committee to be constituted by the House.

Urgent Need to Investigate the Stagnation in the Prices of some quoted Stocks on the Nigerian Stock Exchange:

Aware that investors who choose to invest money in buying shares of publicly quoted Companies expose their money to the risks inherent in the operations of the given Company and therefore reasonably expect to share in the profitability of such Company in two basic ways: through dividends per share as declared by the Company and the appreciation in the price of the Company’s stock, from time to time;

Also aware of media reports on the daily trading performance of some Companies quoted on the NSE indicating positive earnings and profitability profiles; but also listed on the Exchange are many other non-performing stocks, whose prices have remained pegged in one position, typically trading at par value over long period of time, for two to three years in some cases;

Concerned that this situation has the direct effect of short-changing investors in the stocks of such Companies, as such investors neither earn dividend nor have any growth in the quoted prices of their investments;

Also concerned that if this trend continues unchecked, it could be a disincentive to the investing public, thus stifling the growth of the stock market;

Again aware of the fact that the stock market is regulated by the Securities and Exchange Commission (SEC) and that both the NSE and SEC have the responsibility of protecting the interests of the investing public in order to sustain the growth of the stock market;

Further concerned that quoted Companies in the Insurance Industry (the largest sector on the market) are the worst affected in this discouraging trend, made obvious by the fact that nearly all the twenty-six Insurance Companies quoted on the Stock Exchange have had their stock prices trading at 50 kobo par value for many years now;

Mandate the Committees on Capital Market and Institutions, and Insurance and Actuarial Matters to:

(i) to investigate the prolonged market dysfunction of the Nigerian Stock Exchange;

(ii) review and confirm the pricing basis of the recent acquisitions of Publicly quoted Nigerian Insurance companies; and to

(iii) liaise with the Nigerian Stock Exchange (NSE), the Security and Exchange Commission (SEC) and the National Insurance Commission (NAICOM) to take steps necessary to stem the trend, including the need to evolve new NSE listing requirements; and report to the House within eight (8) weeks for further legislative action.

Need for Completion of the Gas Turbine Project in Egbema, Imo State and other Power Plants in the Niger Delta Region:

Notes that as part of the National Integrated Power Projects, the Niger Delta Power Holding Company (NDPHC) on behalf of the Federal Ministry of Power, Works and Housing, awarded a contract to Rockson Engineering to carry out engineering, procurement and construction of a 378 MW Gas Turbine Power Station at Egbema, Imo State;

Concerned that Rockson Engineering has failed to complete the two Power Plants several years after the award of the contracts and has demobilized from the sites, citing paucity of funds as being responsible for the delay in completion of the projects;

Determined to ensure that the two outstanding Power Plants at Egbema, Imo State and Omoku, Rivers State are completed to support the Federal Government’s desire to solve the power problem in Nigeria;

Set up an Ad-hoc Committee to investigate the circumstances surrounding the delay in completion of the Egbema Power Plant in Imo State and Omoku Power Plant II in Rivers State and report back within six (6) weeks for further legislative action.

The House in the Committee of the Whole considered the following reports;

Report of the Committee on Sports on a Bill for an Act to Repeal Nigerian Football Association Act, Cap. N110, Laws of the Federation of Nigeria, 2004 and Re-enact the Nigeria Football Federation Bill to Provide for the Administration of the Game of Football in Nigeria; and for Related Matters (HB.587) (Laid: 5/12/2017).

Committee on Agricultural Production and Services:

Report of the Committee on Agricultural Production and Services on a Bill for an Act to Establish the Fisheries Institute of Nigeria charged with Responsibility for Registration and Disciplining of Members of the Profession; and for Related Matters (HB. 595) (Laid: 19/7/2017).

Report of the Committee on Public Petitions on the Petition by Ordinary President (Dr.) Ahmed Isah on behalf of Samuel David and Eight others against the Chairman, Suleja Local Government Council of Niger State on the forceful Demolition of Houses belonging to Original Inhabitants of the Old Army Barracks Suleja, Niger State (Laid: 20/2/2018);

(i) Urge the Chairman, Suleja Local Government Council of Niger State to relocate all the inhabitants (both the Retirees and non-retirees of Nigerian Army);

(ii) Urge Suleja Government to redress the Violations of Fundamental Human Rights of Samuel David and Eight others.

Report of the Committee on Public Petitions on the Petition by Osita Nwankwo against the Chief of Army Staff on his wrongful retirement from service (Laid: 20/2/2018);

(i) urge the Nigerian Army to reinstate Osita Nwankwo;

(ii) to be properly placed alongside his counterparts in the Nigerian Army;

(iii) that all his entitlements including salaries or emolument be paid to him.

Petition by Olumuyiwa Ogunlami and Co.:

(i) Urge the University to vacate and desist from encroaching on the Area of Land not acquired vide Government Notice Number 2424 dated 12 December, 1962, published in the Federal Gazette Number 105 Volume 49 of 29 December 1962;

(ii) that the Attorney-General of the Federation and the Federal Ministry of Education should engage a competent Estate Surveyor to compute the value of compensation payable to Delfino Anthonia Mekanda and three other family Members. [DEFERRED]