4 Pregnant Women, 140 other Nigerians return from Libya, get Free Phones

A batch of 144 Nigerians, which included four pregnant women, on Thursday voluntary returned from Libya with the assistance of the International Organisation for Migration (IOM) and the European Union (EU). 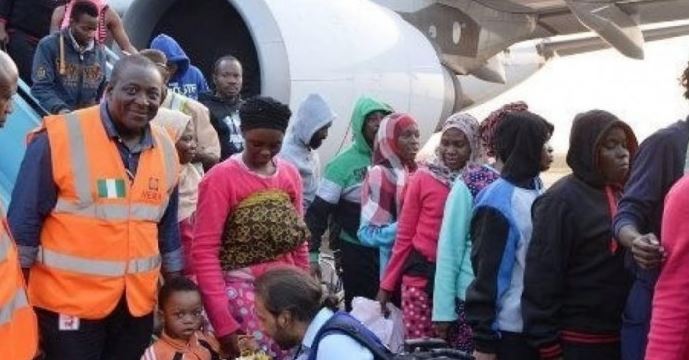 The News Agency of Nigeria (NAN) reports that the returnees arrived at the Cargo Wing of the Murtala Muhammed International Airport, Lagos at 10.30pm.

They returned aboard a chartered Airbus 320 with registration number LZ-MDI operated by VIA Airways.

The returnees comprised 54 adult females — four of whom were pregnant — and seven female children.

There were also 79 adult males and four male children.

Also on hand to receive them were officials of the Nigerian Immigration Service (NIS) , the National Agency for the Prohibition of Trafficking in Persons (NAPTIP) , Federal Airports Authority of Nigeria (FAAN) and the Police.

The returnees were each given £100 to settle down in Nigeria, while some state governments assisted them with transportation back home.

Telecommunications company, Airtel, in collaboration with the Office of the Senior Special Assistant to the President on Diaspora and Foreign Affairs, also gave the returnees free mobile handsets and sim cards to facilitate their reintegration.

In 2017, 6,806 Nigerians were brought back from Libya through the efforts of the IOM and EU.

The Nigerians had been stranded in the volatile North African country enroute Europe, with many being subjected to abuse. (NAN)