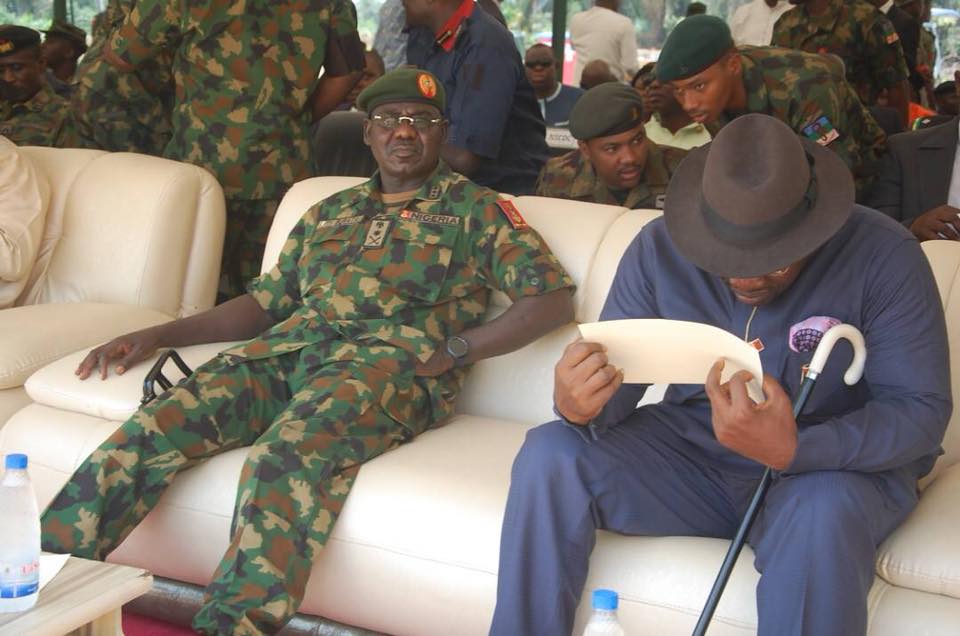 The Nigerian Army has flagged off the construction of 16 Brigade Camp Buratai in Yenagoa.

Delivering, his groundbreaking remarks, the Chief of Army Staff, Lieutenant General Tukur Yusuf Buratai who was highly elated disclosed that it is a historical milestone. He further stated that about a year ago he was in Bayelsa State for the operatinilzation of the Brigade and now he was pleased to be associated with the developmental strides that have taken place in the last one year.

He commended the Brigade Commander for interpreting his vision which is to ” To have a professionally responsive Nigerian Army in the discharge of its constitutional roles.”

He further stated that the flag off of construction work is inline with President Buhari’s commitment to the welfare of troops, stressing that be places high premium on the welfare of personnel.

While delivering his remarks His Excellency, Governor Henry Seriake Dickson who was visibly delighted stressed that he will continue to partner with the Army to enhance the development of the Barracks. He has undertaken to build a Command Children’s School, Officers Mess, WOs/ Sergeants as a Soldiers Canteen Mess with immediate effect. This he said was a demonstration of his administration’s commitment to security.

In a related remarks, an oil magnate, Chief Jackrich Tein jr who is the Founder of Belema Oil stressed that the Nigerian Army has done so much for the unity of this great nation, stressing that the officers and men who laid their lives in defence of the nation should be appreciated. In demonstration of his love for the Nigerian Army he has awarded a scholarship to 300 Children of soldiers who died or incapacitated in the line of duty.

This he said will run for 45 million per annum. He has also undertaken to construct one block of 30 family units of Corporal Below Quarters at the camp with immediate effect.

In his welcome address, the Commander 16 Brigade, Brigadier General Kevin Aligbe stressed the uniqueness of the event, stating that it has signposted the flurry of construction activities that would attract much needed development to that part of Yenagoa. He also appealed for intervention to actualize the gradual development of the permanent site of the Brigade and its affiliated units across the State.

He was optimistic that the Brigade would justify the huge investment in this fighting formation as a catalyst against criminality in Bayelsa State and the Niger Delta region.

Highpoint of the event was the symbolic flag off of the construction work by the Governor and the COAS, planting of trees at the Brigade Peace Park and the Unveiling of the gate by the COAS.