President Buhari Gives Assurance Message to The People of Benue 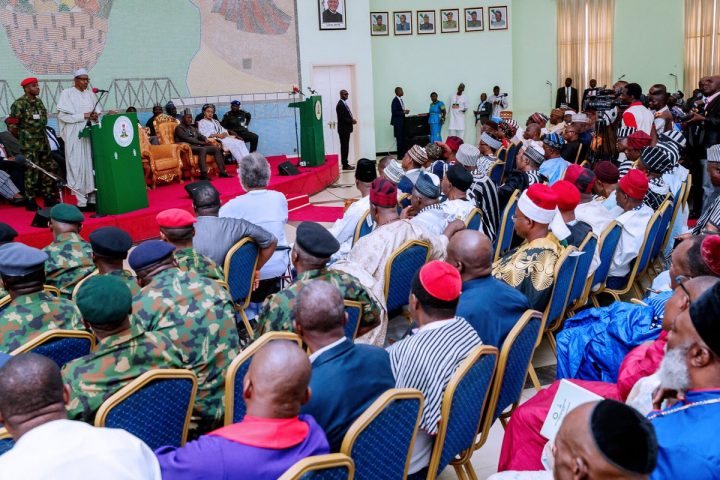 President Muhammadu Buhari was in Benue state today to gain insight to the re-occurring farmers/herdsmen clashes in the state.

The President in the town hall meeting attended by farmers, herdsmen and government officials including Senators and Members of the House of Representatives, said he is doing his best to tackle insecurity in the land.

“We are doing everything possible to end the recurring attacks by armed herdsmen in various parts of Nigeria. I also appealed to them to please give the security agencies a chance to deal with the situation decisively.

I will not be President forever, Governor Ortom will not be Governor forever. Long after our service, farmers and herdsmen in Benue and elsewhere in Nigeria will still exist and will live and work side-by-side. It is our hope that this co-existence will always be a peaceful one.” He said.

He denied insinuations that he overlooked the killings that happened in Benue, saying he is genuinely worried over them.

Buhari reminded the people that there are more than 250 ethnic groups in Nigeria, with different cultures and beliefs, put together by God for a reason. He said that the all can live together peacefully.

The President gave the assurance that Government its part would diligently fulfill its duty of security and law enforcement.

“Once again I sympathize with the people of Benue State, and the families of all those who‘ve lost their lives in these attacks. The security agencies will continue to work to protect all Nigerians. And we will not allow anyone who takes the life of a Nigerian to evade justice.” He added.

On his part, Governor Samuel Ortom of Benue state appealed to the president to upgrade the ongoing military exercise in the state tagged ” Ayem A kpatema” to an operation to effectively curb herdsmen attacks.

”If the exercise is upgraded to an operation, it will assist greatly in ending the incessant attacks and senseless killings by herdsmen,” he said

He urged Benue people to exercise restraints and learn to live in peace with other people. Ortom still maintained that ranching was the best option for cattle breeding in the country.