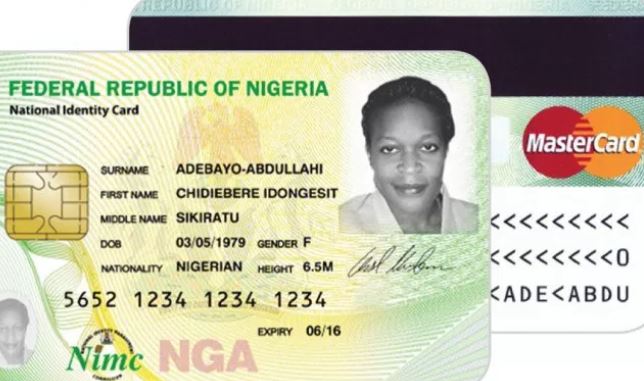 The Managing Director of the NIMC, Mr Aliyu Aziz, made the observation in an interview with the News Agency of Nigeria (NAN), in Abuja on Sunday.

According to him, the NIN is fast gaining acceptance by Nigerians and institutions and has a lot of benefits.

Aziz explained that NIN was a set of 11 non- intelligent numbers randomly chosen and assigned to an individual at the completion of enrolment into the National Identity Database (NIDB).

“The NIN is used to tie all records about an individual in the database and is also used to establish or verify an individual’s identity.

“According to section 27 (1) and (2) of the NIMC Act, 2007, transactions including, applications for and issuance of an International Passport; opening of individual and/or group bank accounts, all consumer credits; purchase of insurance policies.

“The purchase, transfer and registration of land by any individual; National Health Insurance Scheme, such transactions that have social security implications, registration of voters, payment of taxes, and pensions, will be done with the NIN,” he said.

He added that government agencies such as the Nigerian Immigration Service (NIS), the Federal Road Safety Commission (FRSC), Central Bank of Nigeria (CBN), Nigerian Hajj Commission, have adopted the mandatory use of NIN.

“It is a requirement for renewal and issuance of a passport, driver’s license and all bank transactions,” he added.

According to Aziz, NIN possesses numerous benefits, which is a gateway to economic growth and viability, taxation and revenue generation process.

He said that NIN would make it easier to track, prove one’s identity within the National Identity Management System (NIMS).

He said consumer credit system would also be easily accessible with the NIN, adding that many Nigerians that have been shortchanged due to unverifiable identity would now have access to credit.

Aziz said that access to social benefits such as Health care, Education, Employment would require the NIN.

“This would now enable the Government track its population ratio to the facilities available, make upgrades and changes where necessary, it would aid in proper planning.

“With the current security challenges in the country, identity management is critical; the National Identity Database will be easily accessible by security agencies, making it easy to track criminals.

“It will also prevent the use of ghost and multiple identities,” he said

Aziz said that the NIN would create a pathway for credible elections accepted by Nigerians, the issues plaguing the electoral process such as underage voting, multiple voting, alien voting, would be curtailed with the use of NIN.

He, however, said that enrolment for the NIN was a continuous process adding that it was pertinent for all Nigerians and legal residents to ensure they get enrolled.

“As stakeholders, it is our duty to work towards achieving success of the National Identity Management System for National growth and development,” he said.