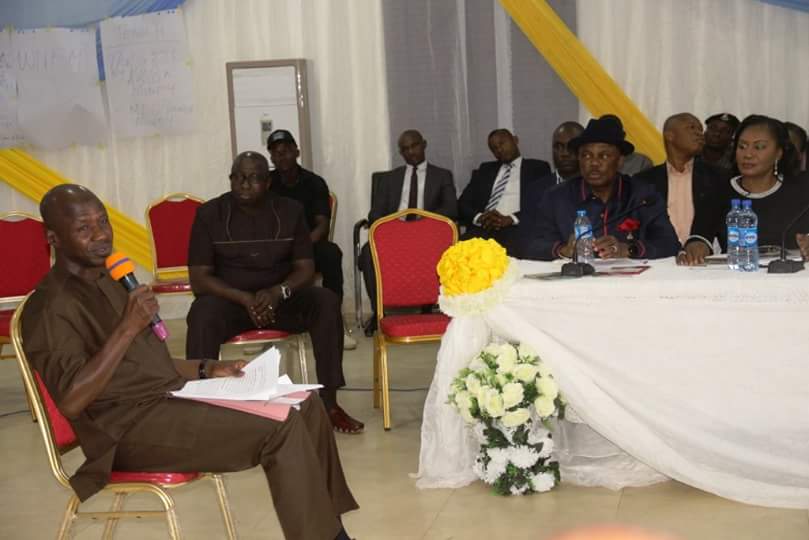 The Acting Chairman of the Economic and Financial Crimes Commission, EFCC, Ibrahim Magu has admonished public officers not to betray the trust reposed in them by the people.

Magu gave the counsel on Saturday 24, March 2018 at Awka, Anambra State while delivering a lecture on the topic ‘A New Dawn : Expectations from the Public Sector’, at a two-day Retreat for senior state officers, newly sworn-in commissioners and heads of parastatals on the importance of avoiding unforseen and embarrassing problems while carrying out their official duties, especially as related to corruption, economic and financial crimes.

He observed that government business is about people and processes that drive it. He encouraged the audience to align with the guiding principles of SERVICOM and promote such bodies that give effect to the anti corruption message being preached in government.

According to him, ” the service component of your engagement with the Nigerian people is enshrined in the SERVICOM charter, which tasks all officials and agencies of government with ensuring quick, efficient and effective service to the citizenry in line with the principles of accountability, transparency and honesty”.

Magu maintained that “the betrayal of public trust is the worst crime a public officer can commit against the people”.

In an all-inclusive run-through of the dos and don’ts of the Nigerian public officer, Magu observed that a precondition to service is embedded in purging oneself of all vices that may negatively influence one’s conduct, pointing out that eliminating all sources of conflict of interest was a good beginning for a peaceful and successful public life.

In his remarks, the Governor of Anambra State, Willie Obiano expressed his gratitude to Ibrahim Magu’s for his personal presence at the event, adducing that receiving the message directly from the corruption fighter would make a lasting impression and impact positively on their jobs.

While assuring the Acting Chairman of his team’s confidence in the anti corruption campaign, Obiano reiterated that as leaders, he and his team were vicariously liable for crimes committed by their subordinates.

The two-day Anambra EXCO Retreat was an intense exercise by the newly inaugurated Obiano administration to tune up its cabinet for better performance.