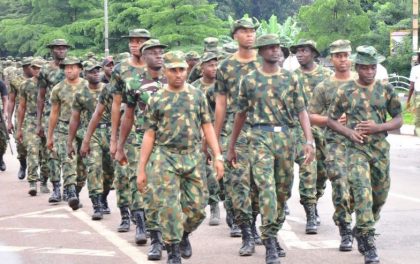 The Nigerian Air Force (NAF) said it had airlifted Nigerian Army (NA) and Nigerian Navy (NN) contingents to the Gambia in pursuance of the ongoing ECOWAS Mission in Gambia (ECOMIG).

AVM Olatokunbo Adesanya, the NAF’s Director of Public Relations and Information, confirmed this in a statement on Monday.
He said that the troops were airlifted to the Gambia on March 25.

Adesanya said the troops who were airlifted by the NAF C-130 Hercules Aircraft, included officers, soldiers and ratings from 351 Artillery Regiment NA as well as from the Special Boat Services of the NN.

“The troops and other equipment deployed for the operation were airlifted from the Nnamdi Azikwe International Airport, Abuja to Banjul in The Gambia,” he said.

“The NAF aircraft is also expected to bring back home the Nigerian contingent that had completed their 6 months tour of duty in the Gambia as stipulated for troop’s rotation in the ECOMIG Operation.’’

He said the NAF’s timely intervention served as deterrence to the former President Yahya Jammeh who then relinquished power on Jan. 21, 2017 thus paving way for the restoration of democracy in the country.(NAN)