NAF Set For New Phase Of Operation Against Insurgents – Commander 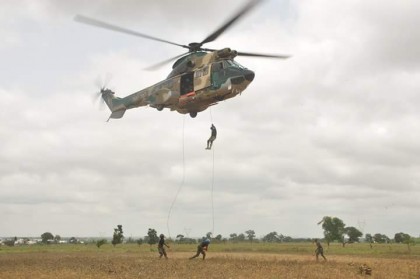 The Air Task Force Commander of Operation Lafiya Dole, AVM Idi Lubo, says the force is set to begin a new phase of an onslaught against insurgents in the North East.

Lubo made this known in Yola on Monday while representing the Chief of Air Staff, Marshal Sadique Abubakar at a feast organized for officers and men to mark the Easter celebrations at the Yola NAF Base.

Lubo said NAF would be supporting the Multi-National Joint Force in a new phase onslaught on fleeing insurgents, adding that the best should be expected from NAF during the operation.

“We are starting an operation in the next few days that would last for about three weeks.

“So, I employ you all who work on the machines, to do everything possible to ensure that you keep these machines serviceable as you have always done for us.

“I wish to on behalf of Chief of Air Staff thank you all for your commitment and dedication to duties that you are call upon to do,” Lubo said.

He noted the latest threats posed by insurgent attempts to infiltrate some military positions and tasked his men to always be on the alert.

Earlier, the Commander of 153 Base Services Group, Air Commander Anthony Ndache, has described the Easter feast organised by the Chief of Air Staff for the officers and men in the base as a show of concern to their welfare.

“This is no doubt a great encouragement to the men in battle. It corroborates the generosity of Chief of Air Staff towards motivating of personnel.

“We are overwhelmed by the support from CAS. On behalf of officers and airmen of NAF Base Yola, I assure you of our loyalty to the Commander in Chief.

“Be rest assured we are committed to the discharge of assigned task given to us.

The News Agency of Nigeria (NAN) reports that highlights of the Easter feast were the inspection of some ongoing construction projects in the base and the inauguration of the newly constructed Operation Area Gate and the CCTV Control Room by AVM Lubo.

He recommended that a letter of commendation be given to Wing Commander M.B Muazu for initiating the security projects.

The Taskforce commander also presented the quarterly award of Best Officer in the base to Group Capt. Sylvester Asuquo. (NAN)