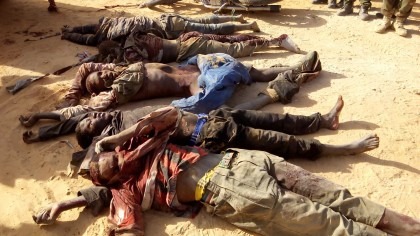 The army also confirmed that 15 persons including a soldier lost their lives and 83 others wounded when the insurgents attacked the communities on Sunday.

“Troops deployed in the Cashew Plantation around Bale Shuwa and Alikaramti villages have quashed an attempt by Boko Haram terrorists to penetrate Maiduguri metropolis on sunday at about 8:10 p.m.

“The insurgents met with stiff resistance of troops who killed six of the insurgents and neutralized seven suicide bombers in the encounter.

“They were beaten by the troops and unable to force their way into the metropolis, the insurgents retreated and callously resorted to attacking locals, who were fleeing in confusion from Bale Shuwa and Alkaramti villages.

“Sadly, 15 persons including a soldier have so far been confirmed dead in the encounter, while 83 persons who suffered varying degrees of injuries are receiving due medical attention; troops are still on the trail of the insurgents,’’ he said.

Nwachukwu disclosed that the insurgent escaped from the Boko Haram enclave at Kekeno in the northern fringes of the Lake Chad Islands, adding that the suspect was being profiled.

The army spokesman noted that remnants of the terrorists were targeting soft targets in their beat to remain relevant and called for collective vigilance by all security stakeholders and the public.

He also called on the people to be vigilant and report suspicious and activities in their communities to security agencies.(NAN)