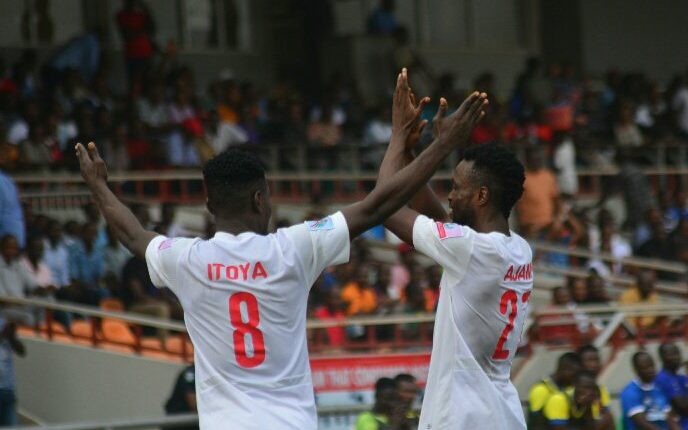 Ajani scored twice in the first half before setting up another for Bright Silas four minutes from time to give Gbenga Ogunbote’s men a richly deserved win on a day of celebration in Enugu.

The Flying Antelopes were flying after earning a creditable away point in their last league game against Go Round in Omoku and Ogunbote made a solitary change to that side, opting for an out-and-out winger Kelvin Itoya in place of Chiamaka Madu.

Yobe’s stars failed to sparkle at any point of the game and a minder was served when the team’s head coach Mohammed Baba Ganaru opted for Chidiebere Ajoku as his false nine in the absence of their suspended top scorer Chinedu Ohanachom. Former Rangers stars Nnaemeka Anyanwu and in-form goalkeeper Itodo Akor were included by the visitors.

After a tepid quarter of an hour, Akor was on red alert as he raced off his line to make a sweeping clearance with Ajani clean through on goal in the 18th minute. If he denied Ajani at that point, it was not to be a little later.

Itoya – Rangers’ player of the month – orchestrated a fine play which saw him past two of his markers brilliantly before squaring for Ajani who executed a simple task of tapping home in the 24th minute to give Rangers the lead.

It became a personal battle between Ajani and goalkeeper Akor from then on as Akor produced a superb reflex save just a minute after the opener to tip the former 3SC striker’s effort over the bar.

The visitors were then dealt a major blow when captain Daniel Agwaza succumbed to injury just before the half hour mark with his place taken by Musa Buhari. The visitors who had barely had a sniff of their hosts’ penalty area then had their first attempt on goal in the 33rd minute but the lanky Musa Mustapha headed Usman Manika’s long throw over Nana Bonsu’s bar.

While the visitors tried to stabilize, they fell further behind in the 44th minute. Ajani suspiciously in an offside position, once again producing a fine, left-footed curler to Ifeanyi George’s pass after a flowing team move. The visitors protested but in vain against the goal, leaving them with a mountain to climb.

Yobe Stars coach Baba Ganaru made a tactical change four minutes inside the second half; replacing centre-back Osita Echendu with midfielder Ismail Bagayan – Babatunde Solomon hitherto at the base of the midfield moving back to the centre-back position.

They continued to threaten through Manika’s long throws and Bagayan spurned a decent opportunity to test Bonsu before the hour mark when one of such throw-ins fell to him at the edge of the box but his effort was wayward.

With the game seemingly poised to end that way, Ajani remained hungry to complete his hattrick and only a last ditch tackle by former Flying Antelope, Anyanwu denied him after Bright Silas had set him through 12 minutes from time.

Ajani then turned provider for Silas in the 86th minute for the game’s final act. The former Plateau United winger firing home emphatically into the roof of the net from close range to give Rangers their biggest win of the season and hand the startled visitors from Damaturu their joint-heaviest defeat of the season.