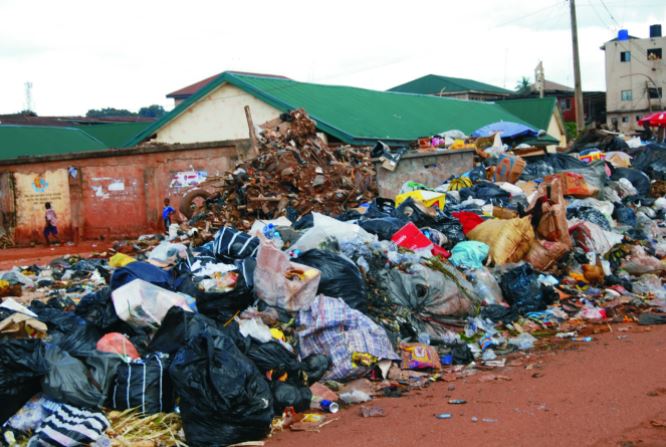 A public health physician, Dr. Ogungbemi Olalekan, has warned that dumpsites situated in residential areas could cause major health hazards.
Olalekan told the News Agency of Nigeria (NAN) on Wednesday in Abuja that such dumpsites could cause diseases like water and airborne diseases.
He said dumpsite could easily be washed away during rainy seasons thereby putting the residents at risk of contracting water-borne diseases such as cholera, diarrhoea and typhoid.
Olalekan said that the micro-organism and contaminated water would cause health challenges to the residents, especially those who use natural water as their sources of water if the dump site was not properly situated.
“Dumpsites situated close to residential areas posed a major health hazard such as water and airborne diseases to people living in such areas.
“During rainy seasons if dumpsite is not properly made or situated far away from the residential areas, water can take some of the micro-organism from the dumpsite and spread them to the house.
“Thereby causing people who are using the natural source of water to cook, bathe and for drinking purposes to easily develop water-borne diseases,” the expert said.
Olalekan said rodents such as rat and rabbit were attracted by the foul odour emanating from the dumpsite thereby forcing them to leave their natural environment to feed from the dumpsite.
According to him, the rodents usually gain access to the house through dumpsites to feed on food and eventually infect people with viral diseases such as Lassa fever and dengue fever.
He warned the public not to set fire on dumpsites as it contained flammable materials that could result in wildfire capable of igniting the whole community and causing environmental pollution.
Olalekan also noted that poor situation of dumpsite was an indication that government and communities were not doing well in the areas of environmental health.
He added that when dumpsite was poorly situated, it reflected poor community planning or planning system was not properly enforced.
“Every community is supposed to have where dumpsite should be situated on their map, so when you see illegal dumpsite it means that the community is poorly planned.
“It was also an indication that government and the community were not doing well when it comes to environmental health,” he said.
Olalekan said it has no any advantage to site dumpsite close to residential areas as most people think so that they could easily throw their waste.
“Some people think is an advantage to live close to dumpsite to avoid working a long distance to throw their waste, but they should also know that there is a disadvantage that outweighs their assumed advantage.
“Because when they are infected with diseases, they will spend a lot of money, some people may not even survive the diseases which dumpsite pose to them,” he warned.
Olalekan recommended that dumpsites should be situated at a distance of about 50 to 200 metres away from residential areas to minimise infestation and attraction of rodents and micro-organisms to the house.
Besides, he advised the general public to evacuate their waste bins regularly to prevent outbreak of epidemics.