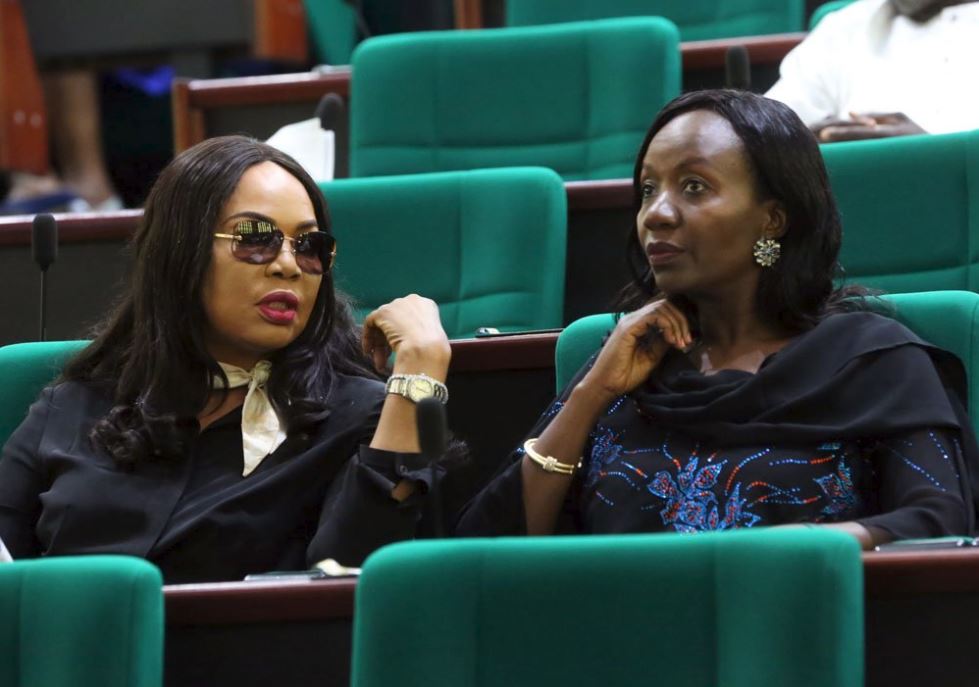 Plenary proceedings of the House of Representatives for Thursday, April 12, 2018, The Speaker of the House, Rt. Hon. Yakubu Dogara presiding

After leading the opening prayer, the Speaker went on to examine and approve plenary votes and proceedings for Wednesday, April 11, 2018

Hon. Ayi Essien Ekpenyong brought a petition on the diversion of funds meant for empowerment and skill acquisition of a community in his constituency, he craved the intervention of the House.

Hon. Mark Gbillah brought a petition form a member of his constituency claiming wrongful dismissal from the Nigeria Police, he asked for the intervention of the House.

In leading the debate, Hon. Olayonu Tope stated that dastardly acts of robbery that occurred in Offa, Kwara State have become a recurring scenario, for the armed bandits to first overcome the Police before unleashing mayhem on citizens and workers, it means the security operatives are not capable of protecting lives and properties of Nigerians. The banks in Kwara South are all closed as a result of the incident, which constitutes grave drainage of the State economy. Hon. Beni Lar in contributing stated that the Nation is becoming a beehive of crime and criminalities that keep going unsolved. She asked if the banks are not safe, where is? She asked the National Assembly to intervene in the structure of the security apparatus. Hon. Ahman Pategi Aliyu stated that the fact that there was no reinforcement to back-up the police in Offa while they were not too far away, casts the security structure in a bad light and the fear of the public needs to be allayed. He decried the abduction, robbery and intimidation of citizens of the nation. Hon. Yussuf Lasun stated that there is a possibility of the students in the Institution of Higher Learning in Offa who are cultists could be responsible for the heinous crime. He also pointed out that the ratio of a police to citizens is 1:500 in Nigeria which is impractical. Hon. Toby Okechukwu stated that there is an avalanche of crime and criminalities nationwide and the root causes of the problems seem not to be addressed. In contributing, Hon. Orker Jev stated that Motions on insecurity make up most of the Motions that come to the Floor of the House, and the nation was becoming an urban jungle. He stated that it looked like both the citizens and the security forces are afraid of the criminals. The Motion was voted on and passed.

Hon. Aliyu Madaki stated that his Motion was bordering on the abuse of the Nigerian Constitution by Officers of the D.S.S who arrested one Dr. Yunusa Dangoni and neither took him to court, nor granted him access to his lawyers and family. This he described was a clear disregard of his human right. Hon. Aminu Suleiman stated that the issue is bordering on the threat of terrorism in Kano, where an individual was apprehended for sending text messages to female secondary schools with the threat of abduction, after further interrogation, it was alleged that the said Dr. Yunusa was behind the plot and its sponsor. The Speaker said the debate may now be speculative and an investigation needs to be carried out so that the informed debate can be held with facts. The Motion was amended to have it investigated first, before the House concludes on the matter, it was voted on and passed.

Hon. Tahir Monguno (Acting Leader) stated that the institution of arbitration is stretched in International and Local litigations, also that the outcome of such litigations were sometimes unclear. The Bill seeks to adopt the New York Convention ensuring such matters follow a standard international pattern. He also stated that the Senate had extensively debated the matter and seeks concurrence. It was voted on, passed and referred to the Committee of the Whole.

Need to Address the Plight of the Victims of Landslides at Tuomo Community in Burutu Federal Constituency.
Hon Julius G. Pondi

Notes that on 18 and 26 March, 2018, two massive landslides hit Tuomo community of Burutu Federal Constituency which resulted in destruction of property worth millions of naira and, displacement of indigenes living in the affected areas,
Aware that consequent to the landslide, members of Tuomo Community are faced with lack of food, loss of shelter and farm lands, exposure to communicable diseases and other devastating effect, including imminent death, if not urgently addressed;
Also aware that the non-completion and abandonment of the Shoreline Protection Project awarded to Vibrofloatation and Geotechnical Nigeria Limited by the Niger Delta Development Commission (NDDC) led to the avoidable but dreadful landslides;

(i) Urge the National Emergency Management Agency (NEMA) to, as a matter of urgency, provide relief materials to Tuomo Community in Burutu Federal Constituency, so as to ameliorate the sufferings of the displaced indigenes;

(ii) also urge the Niger Delta Development Commission (NDDC) to immediately recall the contractor, Vibrofloatation and Geotechnical Nigeria Limited, to site to complete the Shoreline Protection Project, so as to avoid future landslides in the area;

As a disaster related Motion, it was put to a vote and passed.

Call for Audit and Upgrade of Facilities at the Benin Airport, Edo State:
​Hon. Omosede Igbinedion.

Notes that the Benin Airport which was constructed in 1956, and located about 2km southwest of the ancient Benin Kingdom is one of the oldest Airports in Nigeria;
Also notes the importance of the Airport to the people of Edo and Delta States which currently does not render night services such as landing or taking off;
Aware that in 2013, a 13 year old Daniel Ohikhena, stowed in the wheel of Arik flight W3544 from Benin Airport to Lagos, among other incidences;
Also aware that in 2015, the Airport was shut down for weeks to allow for upgrading of the Runway and the firefighting department;
Concerned about the gradual dilapidation of the Benin Airport Runway, absence of Perimeter fencing which makes the Airport susceptible to trespass by both people and animals, and lack of capacity to operate flight travels beyond certain times in a day;
Recalls that when Mr. Saleh Dunomas, the Managing Director of the Federal Airports Authority visited the Airport in 2017, he expressed the intention of the Authority to concession the Airport and to partner with the Edo State Government to operate 24 hours flight schedule daily;
Cognizant of the need to ensure security and safety in Nigeria’s aviation sector, hence the call to improve the condition of the Benin Airport;
Desirous of taking pro-active measures to ensuring that the Benin Airport is upgraded to meet International standards;

Need to Investigate the Proposed Payment of $17 Million to Lawyers by the Attorney General of the Federation for Recovery of ‘Abacha Loot’
Hon. Mark Terseer Gbillah:

Aware that Mr Enrico Monfrini, a Swiss Lawyer was engaged by the Nigerian Government since 1999 to work on recovering the Abacha Loot for which the sum of $321 million was a part and had finished the Luxembourg leg of the job since 2014 when Mohammed Bello Adoke was the Attorney-General of the Federation;

Again aware that Mr Mofrini had since been paid by the Federal Government for his legal services for the recovery of the money which was then domiciled with the Attorney-General of Switzerland pending the signing of an MoU with Nigeria to avoid the issues of accountability around previous recoveries;

Notes that all that was left was the signing of the MoU which is a government-to- government communication for the money to be repatriated to Nigeria;

Also aware that Abubakar Malami, SAN, the Minister of Justice and Attorney-General of the Federation, had curiously engaged the services of another set of Nigerian Lawyers in 2016, namely, Oladipo Okpeseyi, a Senior Advocate of Nigeria (SAN), and Temitope Adebayo for a fee of $16.9 Million (about N6 Billion), without due process;

Recalls that both Lawyers had worked for President Muhammadu Buhari’s Congress for Progressive Change (CPC), a legacy party of the All Progressive Congress (APC) when Malami was the legal adviser of CPC;

Also recall that the terms of the agreement reached with Mr. Mofrini for the recovery clearly spelt out that no other lawyer would be engaged for the return of the money to Nigeria;

(i)​ Set up an Ad-hoc Committee to investigate the circumstances surrounding the engagement of Nigerian lawyers, namely – Oladipo Okpeseyi, (SAN), and Temitope Adebayo for a fee of $16.9 million (about N6 billion), when the actual work had been concluded by Mr Enrico Monfrini, and was paid by the Nigerian government for the recovery of the sum of $321 million part of the Abacha loot from Luxembourg, and whether due process was followed and to report back within six weeks for further legislative action.

(ii)​Request His Excellency, President Muhammadu Buhari, GCFR, to suspend the payment of the said fee of $16.9 million (about N6 billion) or any part thereof pending investigation on the matter.

In leading the debate, Hon. Gbillah stated that the recovery of the Abacha loot used to be shrouded in secrecy, but revelations have shown that the process is in danger of breeching the contract terms and abuse of due process in recruiting the second set of lawyers to conduct a job already done and completed. Hon. Nkem Abonta stated that if indeed the newly contracted lawyers actually worked with Abubakar Malami in another capacity earlier, it would indeed be a breach of contract. Hon. Rita Orji stated that the House needs to investigate the alleged breach of appropriation process in release of public funds for consulting lawyers with such huge sums of money without having it appropriated for. Hon. Agbonayinma Johnson stated that the Motion worries him in the sense that the money paid to the Swiss lawyer was not mentioned. He asked for a wholistic view and let the investigation expose the culprit. The Motion was voted on and passed.

All Clauses voted on and Carried.

Adjournment
The House adjourned Plenary till Tuesday, April 17 by 11:00 Am