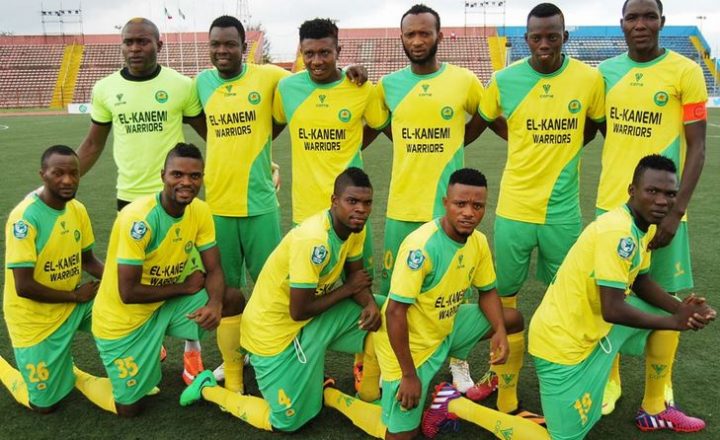 It was more misery for Heartland in Maiduguri where hosts, El-Kanemi Warriors scored thrice with a brace from Anthony Yeful to cruise to a 3-0 win on Sunday.

It was an NPFL Matchday 17 fixture at the El-Kanemi Warriors Sports Centre where a win was very crucial for both sides that share neighbourhood in the bottom-three of the log.

It took the second half brace from Ghanaian import, Anthony Yeful to make victory certain after Bello Kofarmata had scored a first half penalty for the Desert Warriors to earn their first full points in three matches. The outcome was no comfort for the Naze Millionaires who have picked just one point from their last three outings.

El-Kanemi started the match with intent but was undone by poor marksmanship. First Kofarmata who had latched onto a freekick in the 14th minute but failed to beat goalkeeper Japhet Opubo.

The home side, after toiling for a while, hit goldmine when Alexandre Kouakou handled the ball in the box under pressure and Kofarmata stepped forward to beat Opubo with a low ball to his left. Kofarmata had two chances to double his tally but the keeper tipped one onto the bar, while the other was blocked for a corner.

The visiting side fought back gallantly with Okoro Ndukwe and Moses Akinade becoming a handful for El-Kanemi Warriors but they couldn’t make their efforts count.

In the second half, the home side secured the win with Yeful’s two goals that started when he latched onto a pass by Sunday Anthony to volley into the net. He would strike again moments later, connecting a pass from substitute, Ocheme Edoh.

“We needed the three points and we knew that it was going to be tricky, dicey. We planned for it and waited for the deep run to goal from our midfielders. We have our problems in the attack but we are working to fix it once the transfer window opens,” Amapakabo told npfl.ng.

For Heartland coach Ezekiel Onyegbulem, the team were undone by inexperience and he said they too are looking to the mid-season transfer window to beef up the team.

“We didn’t get it right due to a lot of factors, we tried to get a result from the match but our players were not impressive. Once the window opens we will inject lots of experienced players, Heartland will not relegate, we will turn things around.

Following are the results of some Match Day 17 fixtures played in the 2017/2018 Nigeria Professional Football League (NPFL) on Sunday: