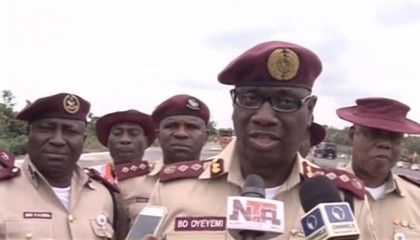 The Corps Marshal Federal Road Safety Corps (FRSC), Dr. Boboye Oyeyemi, recently has disclosed that having most of the tyres used in Nigeria produced locally is a key factor in eliminating fake and substandard tyres on Nigerian roads.

According to the Corps Public Education Officer, Bisi Kazeem, Oyeyemi made this known in a presentation titled “Merits of the Proper Use of Tyres” delivered at the 2018 National Tyre Conference, organised by the National Automotive and Development Council (NADDC) in Kano with the theme: ‘Strategy for Resuscitating Tyre Industry in Nigeria’.

Kazeem noted that in the presentation, the Corps Marshal stated that Tyres have been responsible for 5,562 vehicles being involved in road crashes from 2012-2017.

Dr. Oyeyemi’s presentation featured a survey conducted by FRSC on use of  tyres on Nigerian roads in 2016 where it was discovered that of the 2,486 Vehicles and 10,024 tyres that constituted the population of the survey, 39% tyres are not expired as against 61%; 50% tyres are new, 35% fairly used tyres, and 15% re-bore tyres; 9% are complete worn out tyres as against 91% that are not complete worn-out.

In spite of the foregoing factors, Dr. Oyeyemi equally noted that higher speeds are less forgiving and lower speeds are more forgiving in all traffic situations including tyre burst. He gave an instance thus; at speed of 80km/hr, the risk is 20 times that of 30km/hr in the case of a tyre blowout.

Furthermore, the Corps Marshal equally lamented total disregard and subsequent non-compliance with the instructions on tyres. He also observed thus, “many of the local vulcanizers use non-properly calibrated measuring tools while some lack basic knowledge of measurement of tyre pressure which results in arbitrary gauging of tyres without recourse to manufacturer’s specification is common

He, however, stressed that poor state of roads such as potholes and failed portions of the road affect the lifespan of tyres.

He stated that the Corps will not relent in its efforts to ensure compliance with safety standards especially as it affects the use of tyres. The efforts are not limited to Enlightenment and awareness creation on tyre safety has been embarked upon by the Corps through electronic and print media including the social media.

Public Enlightenment where (a lot of handbills on tyre education have also been distributed to motorists, Pre-trip vehicles inspection programme at motor parks aimed at encouraging drivers to inspect their vehicles before embarking on a journey, Free Vehicle Safety Checks, and Total Enforcement.

Stating that the campaign on tyres need the cooperation of stakeholders to be successful, the Corps Marshal observed that winning the ‘war’ against the substandard use of tyres requires the cooperation of all Stakeholders which is not limited to the NADDC, SON, NSE, NPF, VIO, MLA, NURTW, FRSC, RTEAN.