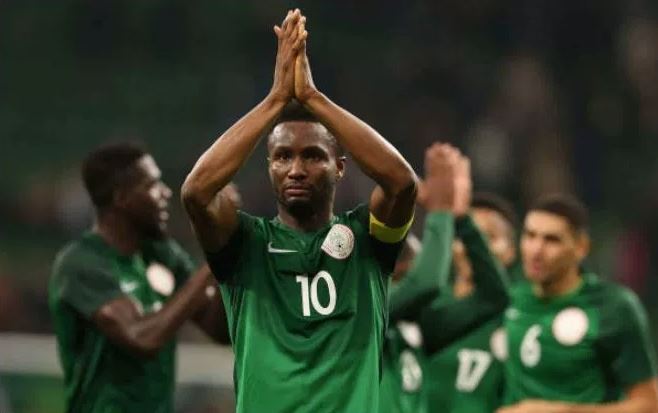 Midfielder Mikel Obi says the Super Eagles will be at their best for the prestige international friendly match against England at Wembley Stadium in London on June 2.

“There will be no option for us other than to give our best with the FIFA World Cup fast approaching.

“The match comes up only two weeks before our first match at the FIFA World Cup.

“It will be a big occasion and a big match for both teams as we both look forward to our respective first matches in Russia.

“England is a special place for me, having spent so many years playing there, and it is one country I love to go to,’’ Mikel was quoted as saying on the Nigeria Football Federation (NFF) website on Tuesday.

The former Chelsea FC player said Super Eagles were already talking to themselves and everyone of them was looking forward to the game.

The News Agency of Nigeria (NAN) reports that Nigeria takes on Croatia in their first match at the 21st FIFA World Cup finals at the Kaliningrad Stadium on June 16.

In their other Group D matches, they will then face Iceland at Volgograd on June 22, and Argentina at Saint Petersburg on June 26.

On the other hand, England will play their first match in Group G against Tunisia at Volgograd on June 18.

Thereafter, they will face Panama at Nizhny Novgorod on June 24, and Belgium at Kaliningrad on June 28.

Meanwhile, tickets for the England/Nigeria match are still selling, with the lowest ticket going for 35 pounds.