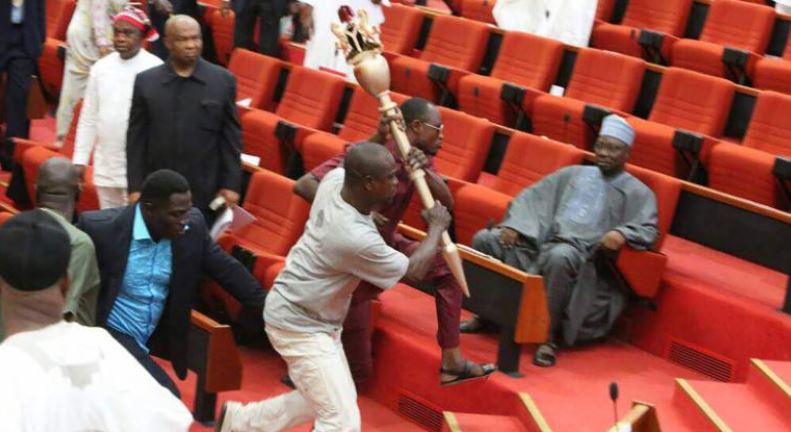 No Place for Mobsters, Cultists in NASS – Dogara

Turaki Hassan, Abuja: Following last week’s invasion of the Senate chamber during which the mace was forcibly removed by thugs, Speaker of the House of Representatives, Hon. Yakubu Dogara has said that the National Assembly is no place for anarchists, mobsters and cultists.

“I listened to debates on social media and conventional media channels where commentators, sometimes even enlightened commentators are trying to draw moral equivalence between the position of the Senate and the act of treason that was perpetuated within the premises of the National Assembly. I want to say there is no amount of anger that should lead any Member of the National Assembly to procure thugs to come and carry out a treasonable act within the premises of this hallowed institution.”

Addressing the issue of associations formed for the protection of government officials, the Speaker explained that while freedom of association is a guaranteed right, such groups contravene the foremost legislative duty of ensuring checks and balances on such officials and the offices which they occupy.

“In this parliament, we are guided by procedures; there is no club of Parliamentarians out there anywhere in the world that is dedicated to the protection or defense of any citizens in government positions because by design and composition of Parliament, our duty is to exercise checks on the agencies of government. So when you begin to have associations of honourable members or distinguished senators dedicated to protecting someone, it means you are acting in violation of our very fundamental responsibility, which is to check the excesses of those offices. And I can tell you if we go by that in the name of freedom of association – caucuses of course exist, but for the protection of democracy – but if we are to go this way, what if there’s a forum of parliamentarians in defence of a minister and they begin to hold their meetings? Or an association of parliamentarians in defense of the Judiciary and they begin to hold their meetings? A mockery of democracy will arise on account of that.”

He lauded the courage of legislators who stood against anti-democratic principles such as the failed third term agenda, even though they did so at great cost and urged others to remain steadfast and eschew all forms of criminality.

“The reason why our democracy is still flourishing is because of courage exhibited by members of the National Assembly. If this courage weren’t exhibited here, we would have had a third term. I want to make it clear that if it were up to the Executive then, nothing would have stopped this country from having the third term. Even though some members were even promised that once the third term is secured, they would all come back, some of them stood against it; some of them stood here and answered their father’s name even though they knew that they may never find their way back to this institution. Yet, they stood firm and took a decision that served to preserve democracy. Today, we are the beneficiaries and truly speaking, some of them never made it back.”

Putting security agencies to task, Dogara said that in other climes, the attack on the Senate would have resulted in mass resignation of security chiefs, especially since the National Assembly has no control over security agents attached to it.

“It is important that we take a look at what has happened because if this happened in other climes, heads of security agencies would have tendered their resignation letters. The fact that there has been no communication at all from heads of security agencies to principal officers of this institution that this is what happened and this is what they are doing in order to ensure that it doesn’t happen again speaks volumes.”

“The issue of security around the presence of the National Assembly cannot be attributed to us because they don’t take commands from us. It is the affair and the discretion of their commanders.”

He decried the growing trend of sycophancy and urged legislators to remain true to their duties and responsibilities as guardians of democracy, and further stated that the institution has a way of rejecting those who attempt to sabotage it.

“It is better that we rise up to the occasion even if it means that individually, we would have to answer our fathers’ names. Even if it means some of us will not come back here as those we succeeded today, we have to take that stand, and for this kind of sycophancy that has grown within the National Assembly, my message to them is very clear; those who have always instigated forces from outside to attack this institution, the institution has developed a process of natural selection. It rejects them.”