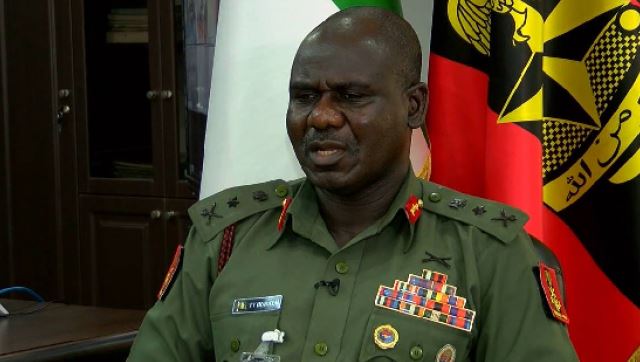 The Nigerian army has promised to make public the findings of the panel it set up to investigate the allegations leveled against it by retired Gen. T.Y. Danjuma.

The Chief of Army Staff, Lt.-Gen. Tukur Buratai, made the promise on Wednesday when the panel led by its President, Maj.-Gen. John Nimyel submitted its report.

The News Agency of Nigeria (NAN) reports that Buratai set up the panel on April 9.

He also received the report of the 17-member Committee on Arms Verification which he had set up on March 19.

NAN recalls that Danjuma on March 24 at the convocation of Taraba State University in Jalingo had alleged that some troops on internal operation in Taraba collude with killers and suspected herdsmen and did not protect residents against attacks.

“I ask all of you to be on the alert and defend your country, defend your state,” he had admonished.

Danjuma’s call had ignited mixed reactions across the country, forcing the army to constitute the panel to get to the root of the allegations.

But receiving the report, Buratai said: “We will take every aspect of this report very seriously, we will make this report available to appropriate superior authorities.

“We will also make this report available to the media so that they will see clearly what transpired and to see whether the allegations against the military, particularly the Nigerian army,  is grounded  or whether it is true or not.’’

Buratai, who said making the report available to the public would clarify the allegations,  thanked the panel members for their painstaking efforts and sacrifice.

He said that was necessary to put the records straight and safeguard the army’s integrity as an entity with an important stake in the unity and integrity of the country.

The army chief also promised that the recommendations of the panel would be implemented.

Earlier, Nimyel said the panel was painstakingly thorough and fair in its extensive consultations with relevant stakeholders before writing its report.

He said to achieve its terms of reference,  the panel visited some flashpoints in the three senatorial districts of the state.

According to Nimyel, the panel also interfaced with some government officials, traditional rulers, religious leaders, locals, military unit commanders and other stakeholders.

He expressed the hope that the report would assist the chief of army staff in taking appropriate decisions that would impact positively not only on the army but Taraba people and Nigeria at large.

While also receiving the report of the committee on arms, Buratai noted that although arms verification was a routine exercise, it, however, became imperative now in view of current challenges.

He also said that previous experiences, as well as the proliferation of small arms and light weapons within the country and across the country ’s borders, necessitated the exercise.

“The verification will assist us to identify if there are any gaps or loopholes so that we can address them immediately.

“We will do our best to preserve our arms and other vital weapons and indeed the ammunition so that they do not get into the wrong hands,’’ he said.

Buratai vowed that any officer or commander found to be negligent (in handling arms and ammunition) would be “appropriately sanctioned.’’

Speaking earlier, the Chairman of the committee, retired Brig.-Gen. Samuel Ayo said that the report of his committee would assist the army in taking decisions that would further enhance its professionalism.

He commended the chief of army staff for raising the standard of the army in spite of contemporary challenges.