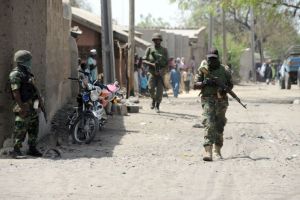 Troops of Operation LAFIYA DOLE with the support of the Air Task Force, Nigerian Police Force, Nigerian Security and Civil Defence Corps and other security agencies including the Civilian Joint Task Force quickly mobilised to the area and cleared the terrorists incursion.

The troops of Operation LAFIYA DOLE are currently in pursuit of the Boko Haram Terrorists and have dominated the area while also patrolling the general area of Jidari. Therefore, the general public and residents of the area that have earlier flee are enjoined to return to their residence. They are further encourage to report any suspicious persons to security agencies currently patrolling the area.