Senator Nwaoboshi, granted bail on self-recognition after 2 days in prison 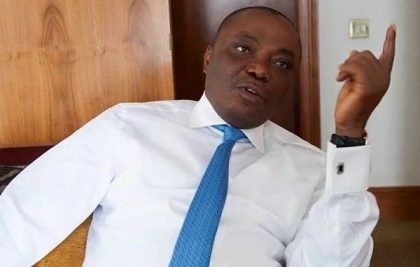 Nwaoboshi was on Wednesday arraigned by the Economic and Financial Crimes Commission (EFCC) on an alleged N805 million fraud.

The lawmaker was arraigned alongside two companies — Golden Touch Construction Project Ltd and Summing Electrical Ltd — on a two-count charge of fraud and money laundering before Justice Mohammed Idris.

Although Nwaoboshi had pleaded not guilty to the charges, Justice, however, ordered his remand in Ikoyi Prisons and adjourned ruling on his bail application until Friday after the submissions of both the prosecutor, Mr M. S. Abubakar and the defence counsel, Dr V. J. O Azinge.

Delivering his ruling on the motion for bail on Friday, Idris held that based on the entirety of processes filed, it was settled law that the court was enjoined to consider a fair dispensation of justice.

He held that the provisions of the Administration of Criminal Justice Act has not voided the powers of the court to grant bail, otherwise, same would have been refused.

Relying on a plethora of judicial and statutory authorities, Idris said: “The power of the court to grant bail in non capital offences is discretionary and the court cannot exercise its discretion indiscriminately.

“There is the presumption of innocence of an accused until guilt is established.”

Idris also said that Nigerian judges could not feign ignorance of the country’s corruption ranking in the world and, therefore, must avoid any act that would “trigger a look of disdain, on the country’s green passport”.

He noted that although medical evidence was led as to the applicant’s ill-health, there was, however, no further evidence to show that his condition had deteriorated.

Idris further held that there was nothing “wavy in granting bail to the accused”, adding “the seriousness of the issue is a more reason for prompt arraignment and accelerated hearing of the case”.

“Bail is not a punishment but a means to secure the presence of the accused to stand trial and I find the paragraphs of the affidavit very significant.

“In my view, a defendant who has been on administrative bail and has been visiting the commission as shown in the affidavit, cannot be a flight risk.

“The law provides for equal dispensation of justice which simply means fair treatment, but in doing so, the court must not blindly follow the submissions of counsel, after all, the loosing party will always say injustice has been done.”

Idris added that the phrase “substantial justice” was used simply because “it is impossible to achieve total justice”.

The judge ruled as follows:

The court then adjourned the case until June 7, June 13 and June 20, for trial.

The News Agency of Nigeria (NAN) reports that the EFCC had alleged that the accused committed the offences between May and June 2014 in Lagos.

Nwaoboshi was said to have acquired a property described as Guinea House, Marine Road, in Apapa, Lagos, for the sum of N805 million when he reasonably ought to have known that N322 million out of the purchase sum formed part of proceeds of an unlawful act.

The money was said to have been transferred to the vendors by order of Suiming Electrical Ltd.

Suiming Electrical had on May 14, 2014, aided Nwaoboshi and Golden Touch to commit money laundering, according to the anti-graft body.