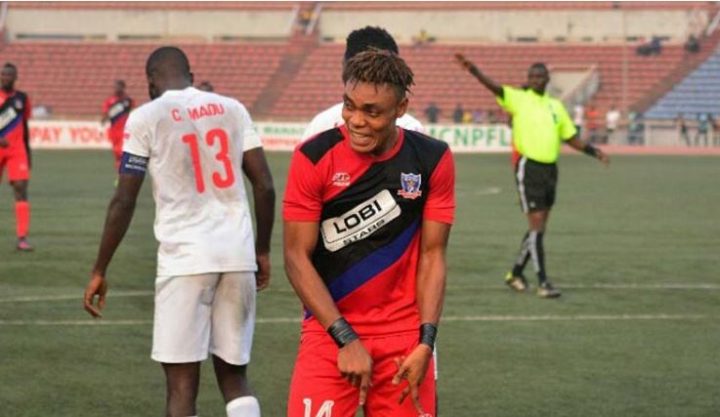 The Nigeria Professional Football League (NPFL) Matchday 19 witnessed dramatic moments with spectacular performances and goals in some games of the day.

The match, which was played at the Sani Abacha Stadium, was watched by a large number of spectators. Lokosa, who increased his goal tally to 16, found the net in the 16th and 47th minutes.

Pillars coach Ibrahim Musa told newsmen after the match that his team’s performance was very good. He also expressed satisfaction with the game’s outcome, saying he was happy that the boys scored two goals after losing against Lobi Stars in Makurdi.

Emmanuel Deutsch, Heartland’s coach,   on the other hand, commended his players for their performance, despite the loss.

Deutsch added ‎that his team would try as much as possible to avoid relegation at the end of the season.

He also said that he was satisfied with the officiating of the match and commended Kano Pillars fans for their orderliness throughout the game.

Meanwhile, the Mounting of Fire and Miracles (MFM) FC of Lagos on Sunday lost 0-1 to Niger Tornadoes FC of Minna at the Bako Kontagora Stadium in Minna.

Coach Fidelis Ilechukwu of MFM, who spoke to newsmen after the matchm said that the officiating of game was a good one despite the defeat.

““It was a good game despite our 0-1 loss to Niger Tornadoes. We lost the match due to fatigue of traveling to Niger state. It was quite a distance from our other engagements,’’ he said.

Ilechukwu said that if the officiating of the league would continue to be as witnessed today then our league would make progress.

Also, Hamza Abara, Niger Tornadoes FC coach, said that he was satisfied with the victory adding that his boys adhered to instructions.
“

“God has been keeping me going as a young coach. I am doing my best and not desperate to be the substantive coach of Niger Tornadoes FC,’’ he said.

Ndayebo Abubakar, wearing number nine jersey for Tornadoes converted a penalty kick 10 minutes into the first half after a player of the visiting club handled the ball in their goal area.

Tornadoes have not lost a match under the new leadership of Abara for nine matches now.The club has won six home matches and drew three away.

Tornadoes are now second on the league table with 30 points from 18 matches, while MFM has 24 points from 17 matches, occupying the 11th position on the table.

Also, Enugu Rangers on Sunday thrashed Wikki Tourist of Bauchi 3-0 in the NPFL matchday 19 in Enugu.

The first goal was scored by Godwin Aguda in the 34th minute to ensure the home team end the first 45th minute with a goal advantage.

The second stanza started with Christian Madu scoring with a powerful shot that deflected from Wikki Ambrose Peter in the 76th minute.

Kelvin Itoya made it 3-0 with a well-taking free-kick from the edge of the box.

Speaking after the match, Rangers Assistant Coach, Famous Ogbei said that the match was a good one for both teams.

“Well, we resolved to work hard and it is our hard work that played off at the end and the boys did well and it was a good day for us,” he said.

He pointed out that the players were confident of winning the match with more than a goal after the first 45 minutes.

In his response, Wikki Tourist Coach, Bala Nkiyu said that they never expected such bashing but expected at worst, a draw.

“The match had been played and the result had been determined so Rangers emerged the winner.

“We are going home to prepare for their visit in the second stanza and I hope we will smile on that day,” he said.

Below are the results of the Matchday 19: