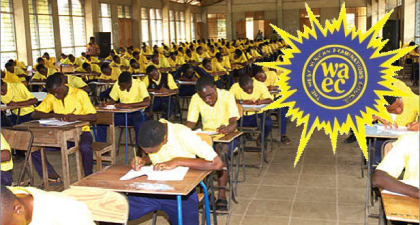 The council’s Head of Public Affairs Unit, Mr Damianus Ojijeogum, made the disclosure in an interview with the News Agency of Nigeria (NAN) on Tuesday in Lagos.

According to him, investigations revealed that the supervisors photo-shopped previous examination papers and forwarded same to operators of rogue websites, who in turn, swindled gullible candidates.

“Our investigations also revealed that some school heads, invigilators, supervisors and candidates who succeeded in smuggling mobile phones and other electronic devices into examination halls, snapped the questions after the examination had commenced, and forwarded same to their collaborators for solutions.

“We have been compiling a list of all supervisors found wanting; at the end of the entire exercise, we shall forward their names to ANCORPS and the ministry of education for proper disciplinary measures.

“Such persons are not staff of WAEC; we shall blacklist them for good,” Ojijeogu said.

He said that `this cheating by any means’ could be described as examination leakage as being reported by some mass media.

“Question papers for the ongoing WASSCE did not leak as has been erroneously portrayed by a section of the media.

“Leakage can be said to have occurred when questions get into the hands of some individuals who are not supposed to have them before the scheduled time.

“No such case has been established since the commencement of this examination.

“Rather than term it as leakage, it is correct to describe it as malpractice which we are committed to tackling.

“We want to assure the general public that the integrity of our examination is a top priority for the council, and we remain committed in ensuring that it remains so,” he said.

Ojijeogu told NAN that WAEC was deploying resources to introduce new techniques to protect its examinations.

“We are all aware that one of the greatest challenges facing the education sector is examination malpractice.

“On our part, we shall continue to do all we can to ensure that this ugly trend is checked.

“We want to commend security agencies, especially the police, for partnering with us in an effort to expose and check the cankerworm,” he said.

Ojijeogu told NAN that such partnership led to arrest of some men in Lagos found to be operating the rogue websites to defraud unsuspecting candidates.

He added that the collaboration assisted the council to apprehend a syndicate at various locations in 2017.

Ojijeogu solicited more support from members of the public to rid the education sector of examination malpractice.

“Council will always be ahead in deploying cutting-edge technologies that will defy malpractice no matter how hard the perpetrators try.

“We will not compromise standards because we have come a long way; our integrity is key,” he said. (NAN)