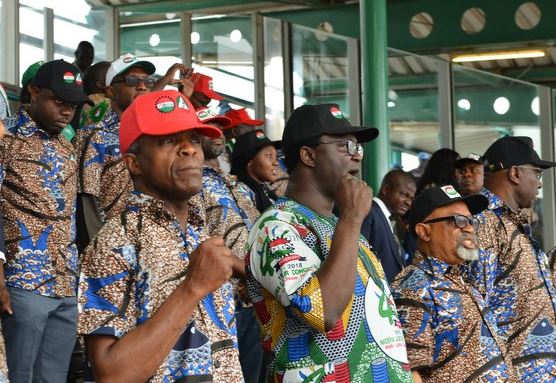 Vice President Yemi Osinbajo has urged the Tripartite Committee on the National Minimum Wage to expedite its assignment on workers’ new minimum wage in the country.

Osinbajo made this call at the 2018 May Day celebration with the theme,“Labour Movement in National Development: Dare to Struggle, Dare to Win’’, in Abuja on Tuesday.

“There is a conscious fact of increasing cost of living and the recognition to ensure a fair and decent living wage has rendered the Minimum Wage Instrument obsolete.

“It is my hope, therefore, that the Tripartite Committee comprising government, labour, and the private sector will expedite its assignment.

“This will enable the Federal Government to present an Executive Bill on a new National Minimum Wage to the National Assembly as soon as possible,” he said.

He added that the argument for a national minimum wage, therefore, could not be faulted because minimum wage was the minimum amount of compensation an employee must receive for putting in his or her labour.

The Vice President noted that the minimum wage should be anchored on the principles of social justice, equity, and fairness.

“As you are all aware, the subject of a National Minimum Wage for the Federation is within the Exclusive Legislative List of the 1999 Constitution of the Federal Republic of Nigeria (as amended).

“Although, there are arguments regarding fixing minimum wage in a federation such as ours,

“It is the responsibility of the government to establish the necessary social protection floor for all Nigerian workers based on the ability of each tier of government to pay.

“We believe that those who can pay above the social protection floor are free to do so, as many have been doing in many states and sectors of the economy.”

He also said that Mr President’s concern for workers was not a theoretical or rhetorical one, but one borne out of experience and respect for the sweat of the working classes.

According to him, this is why we evolved mechanisms to bail out all the 36 states of the federation with N1.91 trillion, in recognition of the shortfalls in their finances arising from the oil shocks of 2015/2016.

“We have extended this support regardless of party affiliation, to enable them to settle the backlog of arrears of salaries and pensions of workers.

“At the inauguration of the National Economic Council in 2015, President Buhari publicly declared that our administration will extend support to every state.

“This is because poverty is no respecter of ethnic group, religion or party affiliation. While we do recognise that payment of salaries and pensions is essential,” he said.

Osinbajo also gave assurance that the Federal and state governments would continue to work together to improve the conditions of workers across the country.

He, therefore, commended the Nigerian organised labour for their contributions toward helping Nigeria get out, in record time, of economic recession arising from past economic mismanagement.

He reiterated the present administration’s commitment to the unity of the Nigerian organised labour to serve as a bulwark against divisive forces, internally and externally.

“I advise that the Nigerian labour movement, and any group for that matter, to always employ its leadership skills of conflict resolution and utilise the internal mechanism to resolve conflicts. Factionalisation is not the answer.

“I must at this point appreciate the Nigerian labour movement for being a strong pillar of support for our anti-corruption agenda.

“The government recognises the fact that indeed the first line real victims of corruption are the Nigerian workers and working families, along with the rural poor.

“It is regrettable that despite the enormous revenues Nigeria earned from oil in recent past, we still have problems with payment of salaries and pensions of workers due to mismanagement and corruption.

“I assure you that under our administration, we will ensure that we expend every kobo of public funds towards securing the welfare of all Nigerians,” he added.

He commended the Nigerian workers for their continued patience and sacrifices toward moving the nation forward.

Osinbajo added that Nigerian workers were by any estimation the most patriotic segments of the population.

According to him, workers are amongst the most committed taxpayers because your taxes are deducted at the source.

“Hence, nobody can deny you the right to interrogate government and how public funds are expended at all times,” Osinbajo said.